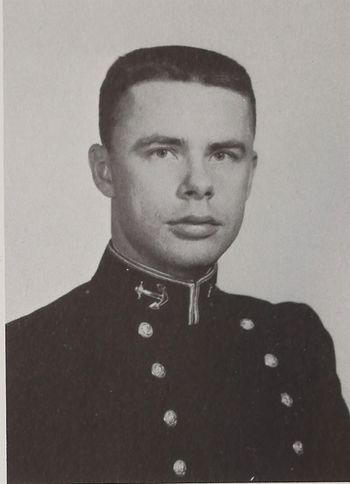 From the September-October 1968 issue of Shipmate:

2nd Lt. Alan A. Kettner, USMC, was killed in action 13 April at Thua Thien near Hue, Vietnam, of rifle fire while on patrol. Services were held in St. Paul's Lutheran Church in Springfield, Minn., his birthplace, with interment in the church cemetery. Military rites were conducted by the John Watson Post of the American Legion and the Veterans of Foreign Wars.

Lt. Kettner attended Macalester College two years before entering the Naval Academy, from where he was graduated in 1967. He was a member of the cross country team and of Operation Information as a midshipman. He had been president of his senior high school class and was the school's representative to the Model United Nations Assembly at Winnipeg, Canada.

Following graduation from the Academy, Lt. Kettner completed basic training at Marine Corps School, Quantico, Va., and was assigned to Company B, First Battalion, 27th Marines, First Division. He had been in Vietnam less than two months.

He is buried in Minnesota.

From the Class of 1967 50th Reunion Yearbook, courtesy of William Belden '67:

Alan was killed by rifle fire while on patrol in Vietnam on April 13, 1968. He was serving with the United States Marine Corps in its infantry division near Thua Thein Province, near Hue, South Vietnam.

According to the letter of condolence from Captain W.T. Sweeney to Alan’s mother, Edna Kettner:

“Alan’s platoon was assigned to participate in a search and clear operation in the village of Thon An Lua, Vietnam. As the platoon approached the village, they came under intense enemy machine gun and small arms fire. They immediately formed a defense position and returned fire. While directing his men, Alan was mortally wounded by the enemy gunfire.

Alan was one of the finest officers I have ever known. His leadership, uprightness and devotion to duty won for him the respect of all who knew him. “

Alan was the first man from Springfield to graduate from the U.S. Naval Academy, where he was a member of the cross-country team and of Operation Information as a Midshipman. Prior to his appointment to the Naval Academy, he attended Macalester College for two years. He was a 1961 graduate of Springfield High School. He was president of his senior high school class and was the school’s representative to the Model United Nations Assembly in Winnipeg, Canada.

Following graduation from the Naval Academy, Alan completed basic training at Marine Corps Officers Training School, Quantico, Va., and was assigned to Company B, First Battalion, 27th Marines, First Division. He had been in Vietnam less than two months when he was killed in action.

In May 1968, the Springfield Rotary Club established a fund as a memorial to Alan. An scholarship is awarded annually to a deserving male student in the senior class of Springfield Public School.

Before leaving for Vietnam, Alan wrote a letter to his mother, sisters, and brothers-in-law, to be opened in the event of his death. Following are excerpts from that letter:

It seems a little strange to sit down this morning and write this letter and at first impression it may seem strange to you, too, to know I did it. For the past four and a half years I have lived the life of a military man and have learned that an intelligent and efficient officer is in control of his emotions at all times. Therefore, you must know I write this with a clear mind and have thought out the contents beforehand.

First of all, let me restate my willingness to serve in Vietnam. It is only another step in doing what I believe I owe to God and my country. As you raised me you taught me what is right and wrong, that no one owed me anything, but that I had been given the opportunity to better myself. You took me to church and I learned about God. All this has influenced by thoughts and ideas. I see an attack on the people of another land...both their bodies and their minds...and it disturbs me. I believe they should be allowed to live in peace. This is something the Viet Cong, the North Vietnamese Army and numerous other groups of people will never let others do. I believe my way of serving must be in the Marine Corps. Here I can actually carry out my beliefs by fighting for my country. All this reminds me of the words of Thomas Jefferson written inside his memorial in D. C. “I have sworn before the altar of God eternal hostility toward every form of tyranny over the mind of man.”

To all of you I say this. Do not let feelings of sadness linger. Rather, think of my willingness to serve. It is my hope that what I have done with my life has made life better for others.

Your son and brother, Alan

Thoughts on an uncle I never knew, yet know so well

I was but 19 months old when Uncle Alan left for Vietnam, so I have no personal memories of him. However, through my mother, grandmother, and more recently, many of Alan’s classmates, I feel like I have come to know the extraordinary man who was my uncle. His loss is still felt among my siblings and cousins, as we wonder what kind of man Alan could have and would have become, who he may have married, and the cousins we should have had. What we do not have to wonder about is the incredible impact he made on the lives of those who knew him in his short 24 years, particularly hearing the testimonies and stories of many Naval Academy classmates in recent years.

My parents hosted midshipmen at our house from my grade school through college years. Alan visited many times and even continued to visit when we lived in Norfolk, VA. I have wonderful memories of him at family gatherings and at our church in Annapolis. He was a special midshipman. Sue (Seeger) Selters of Claremont CA SUE SELTERS, 12/24/14

Alan, we only worked together for a short time before you left, but I admired your standards and principals. You would have gone far in life. After I got back from overseas, I saw your mother and told her what a great son she has and she should be proud. Now when I get back to our small town, I visit our cemetery to say hello to my mother, your mother and you. It may be your resting place, but I'm sure your spirit soars with your other lost brothers. Too short of a life! PAUL SCHMIDT, 7/13/03

I wanted you to know that we (Your Marines) did all we could that awful day. The force we ran into turned out to be far stronger than expected. You were one of the very first men to fall. I found the radio and your map, then tried to call mortars on the enemy positions, but I was also hit before they could fire. I regret to report we got badly chopped up, sir.

We were caught and pinned in a three-way triangulation of fire. Whichever way a Marine moved, he ran into automatic weapon beaten zones. Many Marines became casualties on that day before Easter Sunday. You know what's strange? I was really looking forward to that hot Easter meal we were promised. Its odd, what you miss in the midst of combat.

Sgt. May, 1st squadleader, rallied the men and restored some order in the midst of all that chaos. He and Sgt Keaveny did real well, sir. I think you would have been proud of them, and just wanted you to know that. I can't say where our Platoon Sergeant went. I didn't see him since before initial contact, but recently heard he was uninjured that day.

Sir, we tried to do right by you. Sitting in Heaven, watching your platoon fight to live, must have been highly frustrating. I just hope you weren't too disappointed. Did you help deflect some of the bullets that flashed past us? I'd like to think so.

Lieutenant, I know you and I had some off moments, but I'm glad I had the opportunity to serve under your command. You were a very dedicated officer. I believe you would have gone far in the Marine Corps, if only you had survived. Can you imagine it? ...General Kettner! Has a kind of nice ring to it; don't you think so?

Sir, your untimely death was our loss.

Al and I spent many late nights cramming together for exams. He was hard-working, honest, and courageous. BARRY POLLARA, 10/4/01

Alan was survived by his mother and two sisters, Mrs. Bernard (Marlys) Berberich of Comfrey and Mrs. Peter (Mavis) Pint of Sunburn.

Alan is one of 34 members of the Class of 1967 on Virtual Memorial Hall.

The "category" links below lead to lists of related Honorees; use them to explore further the service and sacrifice of the alumni in Memorial Hall.
Retrieved from "http://usnamemorialhall.org/index.php?title=ALAN_A._KETTNER,_2LT,_USMC&oldid=132895"
Categories: