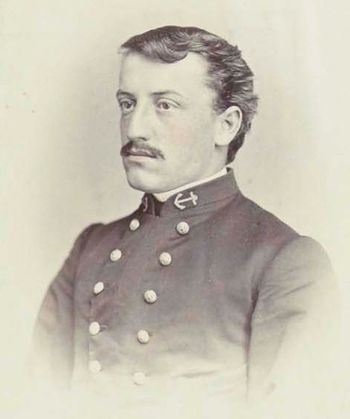 While serving the United States on the U.S.S. Kansas, Forée lost his life at sea in a shipping accident while trying to save the life of his commanding officer, Commander Alexander Foster Crosman, who was thrown overboard by a raging sea near Nicaragua on April 12, 1872. Forée was a member of the Nicaragua Canal Surveying Expedition and drowned along with Crosman and four others. Six of his fellow sailors were awarded the Medal of Honor by preventing the loss of life of several of their shipmates. Forée's body was never recovered. His family erected a monument at Cave Hill Cemetery in his honor. His last words were: "Goodbye men, leave me, save yourselves."

1862, April 17, appointed an Acting Midshipman, on probation at the Naval Academy, from Kentucky. 1867, June 6, graduated. June 10, detached from the Naval Academy and placed on waiting orders. September 30, ordered to the Piscataqua, Asiatic Squadron, to report on the 1oth of October following. 1869, January 13, commissioned as an Ensign, to take rank from December 18, 1868. 1870, November 28, detached from the Delaware (Piscataqua) and ordered to Washington for examination preliminary to promotion. December 12, commissioned as a Master, to take rank from March 21, 1870. 1871, March 15, ordered to signal duty at Washington, D. C. July 8, detached and placed on waiting orders. August 3, ordered to the Kansas, North Atlantic fleet, 1872, April 12, drowned at Greytown, Nicaragua, by the capsizing of the first cutter of the Kansas, while endeavoring to rescue the crew and officers of the whale-boat of that vessel, which had capsized in the surf.

Alfred Forée, son of Erasmus D. Forée, was born in the town of O'Bannon, Jefferson County, Kentucky, in August, 1846, and lived there until he entered the Naval Academy at Newport, R. I., in 1862, He graduated in 1867, and was ordered to the U. S. S. Piscataqua (name of vessel afterward changed to Delaware), at Portsmouth, N. H. He served on board of that vessel for three years, on the Asiatic Station, being promoted to Ensign and Master in the meanwhile. He returned home in the same ship, and after a short visit to his family in Louisville, Ky., was ordered to duty under instruction in signals at Fort Myer, near Washington, D.C.

In September, 1871, he was ordered to the U. S. S. Kansas, at Portsmouth, N.H. While attached to this vessel, lying off Greytown, Nicaragua, he lost his life, April 12, 1872, in going to the rescue of Commander Crossman and others who had been capsized in the surf off that port.

As soon as it was reported that the whale-boat, in which Commander Crossman had started for shore, had capsized, Lieutenant Forée volunteered to go in a cutter to their assistance. After reaching the line of breakers he tried to veer his boat from the anchor, but having parted the line, he returned to the ship for another anchor. He went again to the rescue, but again was unable to veer his boat; he then tried to veer a cask, but met with no success. Seeing the men apparently drowning before him, he determined to risk running the surf, Unfortunately, the cutter was capsized and all hands were thrown in the water. Lieutenant Forée came to the surface near the boat and seized the upturned keel; but having been hurt, it was thought, he was unable to keep his hold. He was washed away twice and each time assisted back, until finally becoming exhausted, he said, “Save yourselves, my men, you can do me no good,” and then sank.

Lieutenant Forée was bright, active, and cheerful at all times. He died in the heroic attempt to save the life of his drowning shipmates.

Beloved in life, he is mourned in death by all that knew him. A tablet was placed in the Naval Academy Chapel with the following inscription:

As a memorial of the Christian heroism of
Lieut. Alfred Forée, U.S. Navy
who lost his life in the surf off Greytown, Nicaragua, Apr. 12, 1872, in a gallant attempt to rescue his commanding officer and boat's crew from drowning, this tablet is erected by his admiring and bereaved brother officers

Despite Alfred's heroic actions, Alexander Crosman '55 was lost in this incident.

The panel mentioned above is now in Memorial Hall.

The "category" links below lead to lists of related Honorees; use them to explore further the service and sacrifice of the alumni in Memorial Hall.
Retrieved from "http://usnamemorialhall.org/index.php?title=ALFRED_FORÉE,_LT,_USN&oldid=131122"
Categories: