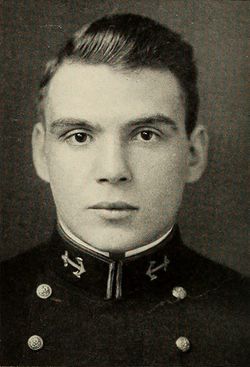 He is buried in California.

Seven Aboard Missing Plane Thickening Weather Threatens to Hamper Search in California. Inyokern, Calif. Feb. 5 (AP)--Thickening weather threatened today to hamper an aerial search for a plane missing for two days from the navy weapons testing ground near here. It carried seven men, five of them civilian scientists. More than 100 planes combed the Fresno-Bakersfield-Inyokern area, where it was learned the plane might have landed shortly after it left the Inyokern airport at 6:30 a.m. Thursday. Fifteen minutes later it was reported at 10,000 feet over Walker's Pass, 50 miles from the field. There was no further word from the plane but one report told of a plane being heard in a snowstorm about the same time. Jim Jorgensen, a mine superintendent, also told of hearing cries for help from his cabin in the densely wooded Kern Reiver canyon, but he was unable to determine their direction. Ten relief pilots were sent from Eleventh Naval district headquarters in San Diego last night, and ground parties and mobile equipment moved into the area from Isabella, a few miles south of Kernville, where the army set up a communications unit. Pilot of the missing plane is Alphonse Minvielle, believe to be from San Francisco, and the co-pilot is Lieut. (JG) Charles V. Mathias, 27, Pittsburgh, Pa. The five scientists aboard enroute to Berkeley for a conference of the American Physical society are Dr. F.K.L. MacDonald of Stanley, Nova Scotia; Dr. John J. McKinley, Brighton, Calif.; Myron G. Kellogg, Santa Rosa, Calif.; Rodney Morrin, Waterman, Calif.; and Joseph A. Vargus, explosives divsion, Inyokern testing grounds.

Husband Of Local Woman Plane Victim Minvielle, 6 Others Found In Wreckage The pilot of a navy transport plane, husband of a Portland woman, his co-pilot and five scientists were found dead Friday in the wreckage of the plane, which crashed In California's Sierra Nevada mountain range Feb. 3, the navy announced. The pilot was Comdr. Alphonse Minvielle of San Francisco, husband of the former Eleanor Dawson of 548 Stevens Avenue. They have four children. The navy reported a ground party had reached the plane 17 miles from the town of Inyokem In Kcm County. Calif, and was readying, according to the Associated Press, to bring down the bodies. The wreckage was at the 7.000-foot level near Owens Peak. The scientists were en. route from Inyokern to a scientific meeting at Berkeley. They were Dr. F. K. L. MacDonald, Stanley, Nova Scotia. Dr. John H. McKinley, Brighton, Calif; Myron O. Kellogg. Santa Rosa, Calif : Rodney Morrin Waterman. Calif., and Joseph A. Vargus, Inyokern. The co-pilot of the two-engine plane was Lt (jg) C. L Mathis, Pittsburgh, Pa. The wreck was discovered Thursday by an air force reserve officer piloting an AT-6. The plane apparently had been covered bv heavy snow which melted this week.

Retrieved from "http://usnamemorialhall.org/index.php?title=ALPHONSE_M._MINVIELLE,_CDR,_USN&oldid=26145"
Categories:
This page was last modified at 13:29 on 13 September 2021.
About USNA Virtual Memorial Hall