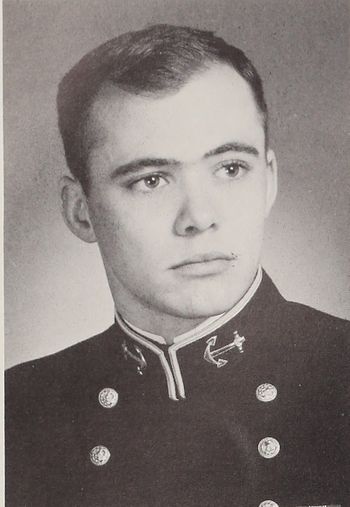 He was also a member of the 4th Battalion staff (fall).

He was also a member of the 4th Battalion staff (fall).

From Fire from the Sky: Seawolf Gunships in the Mekong Delta By Richard C. Knott:

On September 20, during a routine daylight patrol in Hau Nghia Province west of Saigon, a Seawolf gunship "disintegrated in mid-air." Everyone on board was killed: the pilot, Lt. (jg) Arnold W. Barden, Jr.; the copilot, Lt. Cdr. Lawrence L. Cover; and door gunners, ADJ-2 Charles H. Goldbin and AMS-1 Harold E. Cowen. A rotor blade had broken off in flight, and the gunship was torn apart as it plummeted to earth. It was every helicopter pilot's worst nightmare, the kind of accident from which there is no reprieve.

The Navy said the crash apparently was accidental.

Col. Arnold W. Barden, USMC. ret., of 8808 Tommy Court said his son had been in Vietnam since January.

Barden, 25, attended junior high school at Coronado and was graduated from high school in Huntington Beach.

After attending Long Beach State College for a year, he entered the US Naval Academy at Annapolis and was graduated in 1969.

Barden also is survived by his mother, Mrs. Natalie Keenan of San Pedro.

Arnold is buried in California.

Our good friend and classmate, Arnold Winfield Barden, Jr. (Jay to his family, Arne to his classmates), was the first from our company to die…on September 20,1971 in Vietnam while flying a UH-1B Huey with the Seawolves of Helicopter Attack (Light) Squadron (HA(L)) 3. I was Arne’s roommate for nearly three years at USNA…in company, on plebe detail, and on the battalion staff.

Arne was my close friend, and he was a great friend to all of our company and many of our classmates. He was an effervescent, outgoing, fun loving guy who had a ready smile and a willingness to get to know you. He had more friends than most of us in Bancroft Hall.

One of his favorite activities was doing photo shoots of the Drag of the Week for The Log. Arne made friends quickly and easily and was always ready to pitch in when help was needed, for work or for fun. When Arne popped into a room in Bancroft, he was always welcome.

Arne was from Southern California and spent a year at Cal State-Long Beach before USNA. His father was a Marine Colonel aviator (in WWII, Korea, and Vietnam) and his mother was a Marine SSgt in WWII. Arne and I visited each other’s homes several times during our years at USNA.

Months after we graduated when I was in New London, my mother awoke one morning at home and found Arne asleep on the couch in their den (we didn’t lock our doors at night in Anderson, SC back then). He was just passing through in the middle of the night and wanted to stop by. While he was in Vietnam Arne corresponded with my parents and my brother. His circle of friends was very large, and all of them were very happy be Arne’s friend.

I was in Palo Alto when Arne died. I received orders as his special escort from San Francisco to San Diego where his funeral was held. His remains now rest in Fort Rosecrans National Cemetery in San Diego.

His mother lies at his head, with her information inscribed on the opposite side of their shared headstone, and his father is interred in the columbarium there. Rest in peace, old friend, from all of us who are blessed by having you brighten our lives for a time in our youth.

I am submitting this input on behalf of my classmate and squadron mate, Arne Barden who was killed in action in the Republic of Viet Nam (RVN) on September 20, 1971. Arne and I were classmates and friends at the Naval Academy – he in 20th Co. and me in 22nd - and after we graduated, we went through flight training at the same time in Pensacola, FL. The war in Viet Nam was going strong and the demand for helicopter pilots was high. Because of heavy losses of river patrol boats and the need to control the waterways of the Mekong Delta, the Navy stood up Helicopter Attack Squadron (Light) 3 (HAL-3) “Seawolves” in 1966 to provide close air support for the riverine forces that included the river patrol boats and SEAL teams. HAL-3 was an all-volunteer squadron that operated with detachments of UH-1B (“Huey”) gunships deployed strategically throughout the Delta.

We both volunteered for HAL-3 and after completing flight school and earning our wings (I was ahead of Arne in the pipeline by about 2 months), we went separately to Survival, Evasion Resistance and Escape (SERE) school (not a fun time), followed by gunnery training with the Army at Ft. Rucker, AL. The Navy didn’t have the facilities to train us to shoot rockets, machine guns and learn basic gunship tactics, so the Army was the answer. In return for the Navy taking over the riverine close air support mission in the Delta, the Army agreed to provide the helicopters for HAL-3, which not surprisingly, weren’t their best or newest.

When Arne arrived in RVN in January 1971, he reported to our main base at Binh Thui and was sent directly to HAL-3 Det 4 which operated out of Ben Luc, a Vietnamese fire base south of Saigon. I was also assigned to Det 4 and it was great to see Arne again. He quickly adapted to life as a Seawolf pilot and was loved by the pilots and door gunners alike. Arne was a true professional and could be counted on in the worst of situations. We flew every day putting rockets, machine guns and mini-guns to good use in support of the river patrol boats, SEAL teams and Army units who were always in need of air support. About half of our flights were at night, so getting a sleep cycle that worked took a little time. We guaranteed that when called for help, we would launch and be enroute to the target in five minutes or less, day or night. We never failed, even in adverse monsoon weather conditions. Our services were in high demand.

After quickly gaining the required combat experience as a copilot, Arne was designated as an Attack Helicopter Aircraft Commander (AHAC) and then as a Fire Team Leader (FTL). Because of the nature of our special warfare operations, Arne had great latitude and responsibility as an FTL in selecting targets and employing tactics to save the lives of friendly troops in contact. We all had great confidence in Arne as a pilot and leader.

Arne’s life and career was cut short in September 1971 while leading a visual reconnaissance mission in the Det 4 area of operations that included the heavily trafficked weapons and supply trails from Cambodia into the RVN. The aircraft and what we felt were our finest officer and enlisted aircrew personnel were lost in the crash. It was a tragedy for our small group of pilots and door gunners who had grown close flying and depending on each other on a daily basis.

It was an honor to have known and served with Arne Barden. He was one of the kindest, most likeable and most capable people I have ever known. He served proudly in HAL-3, the most highly decorated squadron in naval aviation history and set a standard of excellence for us all. He is greatly missed.

Arnie,
It's been tough to learn of your passing. As your roommate at Villanova Prep for the first two years of high school we got to know each other pretty well. You were the reason we passed room inspection every Saturday. You must have known Annapolis was in your future. I remember very fondly the weekend your folks invited me down to your home at El Toro Marine Base to spend the weekend with all of you. Your Mom and Dad were such warm and kind people - I'm so sad they had to face the unimaginable tragedy of your loss. Before I go, I wanted you to know that I dedicated my career to you and all the others who weren't able to come home from that war. I was in the Submarine Service, fulfilling a childhood dream, but I had it safe and easy and made it back to go to college. Thank you for the courage and spirit you and your comrades passed on to me - it has made all the difference. HUGH BARRETT, 5/25/14

I was so lucky to get to know you at Huntington Beach High School. You were the friendliest person with a terrific personality. You use to call me Plum because my favorite color was royal blue and I wore a lot of it. I am so grateful for all you did so we can enjoy this great country. I am sorry it took me so long to acknowledge your ultimate sacrifice CONNIE (ANDERSON) BOWERS, SISSY46_9@MSN.COM, 6/5/11

Arnold is one of 17 members of the Class of 1969 on Virtual Memorial Hall.

Retrieved from "http://usnamemorialhall.org/index.php?title=ARNOLD_W._BARDEN,_JR.,_LTJG,_USN&oldid=143616"
Categories:
Hidden category:
This page was last modified at 19:34 on 20 October 2021.
About USNA Virtual Memorial Hall