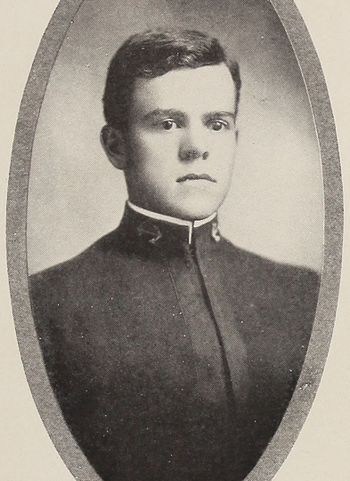 Arthur was lost on November 19, 1910, in an accidental explosion while testing 5" guns at Indian Head, Maryland.

He is buried in Arlington National Cemetery; his headstone reads: "Do not bother with me anymore, Doctor. Look after the others."

He was survived by his wife, daughter, parents, and brother.

WASHINGTON, November 19, 1910 – By the premature explosion of a 5-inch, .51 caliber gun at the Indian Head, Maryland, Proving Grounds of the Navy, four men are dead, including Lieutenant Arthur G. Caffee, who was in charge of the gun, and one man, a negro, seriously injured. The breach block of the gun, which was being tested, blew backward into the crew which was firing the gun. The explosion probably was due to a bent or fouled firing pin, which projected beyond the face of the breech plug of the gun.

The dead, in addition to Lieutenant Caffee are:

The Ordnance Bureau has ordered a Board of Inquiry to develop details of the accident, the only witnesses to which, so far as can be learned, were John C. Coleman and Sidney Dyson.

The gun, which was a new one from the Navy Yard Gun Factory and being tested for the first time, had already been fired twice. The accident occurred during the third round just as the breech was being closed.

Lieutenant Arthur Gill Caffee was born in Missouri, and was attached to the staff of Rear Admiral Shroeder, on the Atlantic Fleet Battleship Connecticut before he was assigned to duty at Indian Head as Inspector of Ordnance. He entered the Naval Academy in 1900. The assistants who were killed and injured were all civilians, and lived in the neighborhood of the proving grounds, 40 miles below Washington.

Lieutenant Caffee was a most competent young officer, highly regarded by his brother officers, and had been in charge of the proving of guns at Indian Head since April, because of his abilities in ordnance. He was born at Carthage, Missouri, in 1882, entered the Naval Academy in 1900, graduating in 1904. He served two years on the USS Nebraska, was promoted from Ensign to Lieutenant in April 1909, and was on the USS Connecticut last year as aide to Rear Admiral Schroeder, Commander-in-Chief of the Atlantic Fleet. Lieutenant Chaffee had his home at Indian Head and when the accident occurred his young wife and little daughter were within sound of the charge by which he lost his life.

Lieutenant Caffee had been on duty at the proving grounds since last April. He resided on the reservation with his wife and one child. His body will probably be interred in the Arlington Military Cemetery.

The Naval Ordnance Bureau has been trying for a long time to find some safety device applicable to guns of this caliber, but so far without success, and if the Gun Captain fails to obey the rule to pass his hand over the face of the breech lock before it is closed to detect any improper projections of the firing pin, then just such an accident as occurred today may happen any time, it is said.

Every precaution ordinarily is taken to protect the firing crews from the failure of the gun under test. It is required that after loading the gun the crew shall retire to a bombproof in its rear and discharge the piece by electricity. The trouble in this case lay in the fact that the gun was discharged before the crew had finished loading it. The brass shell containing the powder and the projectile had been inserted in the piece and the breech box had swung on its hinge.

But before the heavy screw threads had interlocked, the projecting firing pin struck the primer on the head of the shell and exploded the charge which blew backwards, tearing off the breech and killing or fatally wounding the crew.

The name of Arthur Gill Caffee was listed for 6 years as living hero in the record of the Navy Department.

The young Missouri officer just out of the United States Naval Academy disobeyed the commands of his superior officers April 18, 1904 to go to the rescue of 32 officers and men who lost their lives in the explosion in the after turret of the battleship Missouri. Although the after turret had flooded neck high with the fire hose, Caffee flung insubordination to the winds and plunged himself in the death chamber of his battleship.

He fought about the water in an effort to find some men whom the spark of life still lingered. Caffee was overcome with water and it was necessary to send volunteers to his rescue.

Arthur was survived by his wife, their three-year-old daughter, an unborn daughter, his parents, a brother, and father in law.

When he died, he was the father of one daughter, Patty Elana Caffee, and my own mother was in utero, born after his death in Washington, DC. His lovely young widow was Mayotta Dickinson Caffee, and the child she bore after his death was my mother, Betty June Caffee, who of course never knew her father. There were no male children. I would love to be in touch with anyone who is interested in knowing more about my grampa. I know that he is buried at Arlington. His young widow, from a Navy family herself, went abroad after the birth of their second daughter, but returned to the USA when rumblings of WWI could be heard in Germany. They relocated to California where they were surrounded by her family, three brothers and her dear father, naval officers all. My granny was born at Mare Island in San Francisco Bay and she enjoyed saying "I grew up on a battleship."

Joseph's classmates erected a plaque in his honor in Memorial Hall.

Arthur was aboard USS Boston when that ship provided aid to San Francisco following the earthquake there.

Others at or embarked at this command: LCDR Jonas Holden '96 (Atlantic Fleet, Connecticut).

Arthur is one of 2 members of the Class of 1904 on Virtual Memorial Hall.