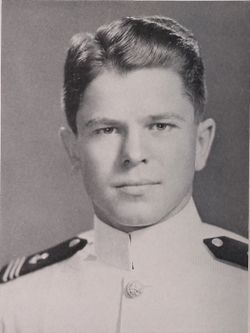 From way back in the moonshine hills of Old Kentucky, Annapolis got one of the most likable Midshipmen ever to bilge a math exam. Tommy's disposition was as sunny as he was fond of hunting and fishing, and that's saying a lot! Though not exactly a six-footer, Tommy was every inch a man. All three years he was out for football and baseball and it follows that he found it much easier to bat a .340 at the plate than he did to star in the section room. His three wives and all those who knew him will always remember Tom as an all-around athlete, a swell sport, and a true friend in every sense of the word.

Ben was lost on December 18, 1951, when the AD-2 Skyraider he was piloting was destroyed by its own bomb blast. He ditched the aircraft into Wonsan Harbor, but was found dead later, likely from exposure.

He was Executive Officer of Fighter Squadron (VF) 194, which was operating from USS Valley Forge (CV 45).

Ben is buried in Kentucky.

Herbert Baslee, Jr. ’43 was also a pilot flying from USS Valley Forge (CV 45) during this period of the war.

Retrieved from "http://usnamemorialhall.org/index.php?title=BENJAMIN_T._PUGH,_LCDR,_USN&oldid=20443"
Categories:
This page was last modified at 13:08 on 23 September 2020.
About USNA Virtual Memorial Hall