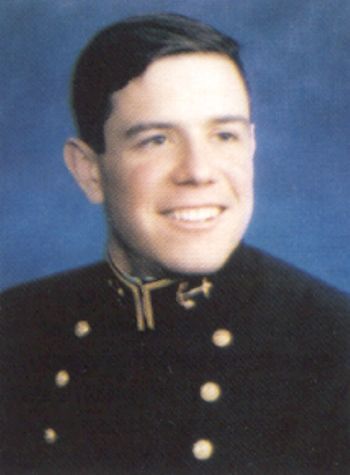 Two young natives of the Washington suburbs, both freshly launched on careers as Navy aviators, were among those killed or presumed dead Sunday in a fiery collision on an aircraft carrier off Norfolk.

Brendan J. Duffy, 27, of Annapolis, and Charles E. Woodard, 26, of Herndon -- both lieutenants junior grade -- were aboard an EA-6B Prowler jet that crashed into another plane while trying to land on the carrier deck.

Both were headed for what might have become the first big international conflict of their careers, as the USS Enterprise prepared to set off for the Persian Gulf this week as a base for possible air strikes against Iraq.

A Richmond area native, Lt. j.g. Meredith Loughran, 26, was also among the four killed in the crash.

Duffy graduated from the U.S. Naval Academy, and news of his death jarred many of his fellow graduates from the Class of 1995, of whom Duffy was the first to die on duty, said class President John Fleet.

"There's an inevitability of these things happening," said Fleet, of Bethesda, "but it doesn't diminish the loss we feel."

Sunday evening, the Prowler was returning to the carrier after practicing nighttime landings and struck an S-3 Viking. Navy spokesmen said they do not yet know the reason for the collision.

Crew members of both planes ejected. Both occupants of the Viking were pulled from the water, only slightly injured. But Duffy was found dead, Navy officials said. The bodies of Woodard, Loughran and Barich could not be found, and officials suspended a search after 24 hours.

Duffy came from a Navy family. His aviator father had retired as a commander after moving his family to Annapolis for a teaching job at the Naval Academy.

After two years at the University of Maryland at College Park, Duffy transferred to the academy -- a move that required him to start over as a freshman -- because "he decided he wasn't getting enough of the professional training he wanted" in the civilian college's ROTC program, according to his brother Brian.

At the academy, Duffy was chosen as commander of one of the 120-member "companies" into which the student brigade is organized. Recently he peppered his family with e-mail full of stories about his activities, including his imminent deployment to the Mediterranean Sea and the Persian Gulf. "He was ready to do whatever he had to do," Brian Duffy said.

From the July/August 1999 issue of Shipmate:

On 8 November 1998, LT Brendan James Duffy '95, posthumously promoted by the President of the United States, was killed during a landing approach when an EA- 6B Prowler, in which he was a crew member, collided with an aircraft in the landing area of ENTERPRISE. Brendan and the other three crew members were killed instantly with only Brendan's body being recovered after his aircraft careened into the sea. Born into a Navy family at NAS Quonset Point, RI in 1971, Brendan spent his early years living in Virginia Beach while his father, Jim ('60), was on duty in that area. As a boy, Brendan enjoyed frequent overnight stays on board INDEPENDENCE in-port when his dad had the CDO Watch and even was allowed to "shoot dead-loads" during aircraft catapult tests. Watching air ops from the Airboss' chair in PRIFLY was another experience that led him to his eventual career choice.

In 1981, after his father was assigned to the USNA faculty, Brendan lived for five years in a lovely old set of quarters on Hospital Point at 3 Wood Road in the Yard. His mother Carolyn made that house a home for numerous visiting Midshipmen, their "drags" and family friends. Brendan named it "Hotel Doofee." Every weekend there were ping-pong and dart tournaments among Brendan, his pals, the Mids, and his two older brothers and sister. Always outsized by his older opponents, the very competitive but always gracious Brendan won more than he lost.

While a close and admired young friend to many of the older Midshipmen who passed through the home, Brendan was also extremely popular among his young peers in the yard and in the community, one of whom, Grayson Church, became and remains, even in death, his closest adult friend. When Brendan's father retired from the Navy the family decided to remain in Annapolis. The "Hotel Doofee" moved out of the Yard to Annapolis Cove, but continued as a center for Midshipmen (largely from Chicago) gatherings. Brendan, lettering in track and golf, graduated from Annapolis Senior High School in 1989 and decided to accept an NROTC scholarship to the University of Maryland's School of Engineering. After two years of excelling in academics and in the NROTC unit, Brendan decided that he "needed more Navy."

With his excellent grades and top performance in the NROTC program, his application for USNA was speedily accepted and he was admitted as a Plebe with the Class of 1995. Now, older and more experienced (but still smaller in stature) than most of his classmates, Brendan quickly rose to the top. His grades, military bearing, and overall excellence brought him the respect of juniors, seniors and peers alike. Routinely on the Superintendent's List, he was his class company commander for three years and, declining the opportunity for a high striper position out-of-company, he chose to stay with his Sixth Company which he led as their (by now over six feet tall) Company Commander at their Graduation.

Having grown up in a largely Naval Aviation environment, his decision to fly was natural. An NFO, he graduated at the top of his flight school class at every level of training. His parents pinned his wings on at the graduation ceremony held at the Naval Aviation Museum at Pensacola, Florida in November of 1996. He was ultimately assigned to the ZAPPERS of VAQ-130 out of NAS Whidbey Island Washington, part of Cartier Air Wing Five aboard ENTERPRISE.

The tragic mishap that took Brendan's life occurred on the first night flight of the first deployment of his so promising career, as the ship made its way to the Persian Gulf to conduct strike ops against Iraqi targets in Operation Desert Fox. The aircrew of Brendan's plane was held blameless in the landing mishap.

His very moving funeral service at the Naval Academy Chapel on 13 November 1998 was attended by thousands of people, including family members, neighbors, and classmates and friends, many from places around the world. Brendan's ashes were placed in the Naval Academy Columbarium at Hospital Point with full military honors conducted by the Naval Academy's USMC Company and a very smartly executed flyover by F-14s Tomcats.

The passing of this extremely talented young officer is a terrible loss to all that knew him, to the U.S. Navy and to the United States of America. The LT Brendan James Duffy USN , Memorial Fund has been established at the Naval Academy Alumni Association (247 King George Street, Annapolis, MD 21401) and will be open for donations until 31 December 1999.

Brendan is one of 6 members of the Class of 1995 on Virtual Memorial Hall.

The "category" links below lead to lists of related Honorees; use them to explore further the service and sacrifice of the alumni in Memorial Hall.
Retrieved from "http://usnamemorialhall.org/index.php?title=BRENDAN_J._DUFFY,_LT,_USN&oldid=106239"
Categories: