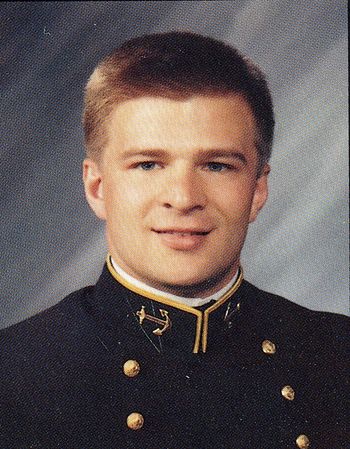 Major Brett Bekken was killed on April 21, 2004 when his F/A-18 Hornet crashed in the California desert during a training mission. He was on a two-plane formation exercise when the accident occurred. Major Bekken, a 1989 graduate of the United States Naval Academy, was a member of VFMA-112 based out of Fort Worth, TX.

An American Airlines pilot has been identified as the Marine Reserve pilot who was killed when his fighter jet crashed in the California desert.

Bekken, 36, was headed to Yuma Marine Corps Air Station in Yuma, Ariz., on a routine training mission. The cause of the crash remains under investigation, Nollette said.

"Maj. Bekken was a patriotic American and a fine Marine," Col. Gregory Raths, chief of staff of the 4th Marine Aircraft Wing, said in a statement. "His death will be felt deeply by everyone who knew him."

Bekken, who grew up in Greendale, Wis., had served in the Marine Reserves for five years after a 10-year stint as an F-18 fighter pilot in the Marine Corps.

"He was doing what he loved to do," his brother, Eric Bekken of Oak Creek said in Sunday's editions of The Dallas Morning News. "He wouldn't have had it any other way."

The downed plane was part of a squadron based at Naval Air Station Joint Reserve Base in Fort Worth. Its wreckage was found Thursday morning in a remote area near Glamis, Calif., about 160 miles east of San Diego.

April 21, 2004. Age 36 years. Loved and loving son of Ron and Sue. Dear friend and loving brother of Eric. Beloved uncle of Ashley and Marissa Bekken. Further survived by aunts, uncles, cousins , friends and his beloved Marine Corps brothers. Brett was a graduate ('85) of Greendale High School and graduated from the United States Naval Academy in 1989. He proudly served in the Marine Corps for 10 years and remained active with a reserve detachment located in Fort Worth,TX. Employed as a First Officer for American Airlines.

Brett was the type of person you wanted to be around. He was always up to something good and he made you want to be a part of it. Brett was a caring person, generous with his time and talents. Fair winds and following seas, my friend--you are missed. Tony Newpower '89

Listed in all news stories as Major, but in Memorial Hall as LTCOL (which is also on his headstone). Posthumous promotion?

Brett is one of 6 members of the Class of 1989 on Virtual Memorial Hall.

The "category" links below lead to lists of related Honorees; use them to explore further the service and sacrifice of the alumni in Memorial Hall.
Retrieved from "http://usnamemorialhall.org/index.php?title=BRETT_M._BEKKEN,_LTCOL,_USMCR&oldid=106187"
Categories: