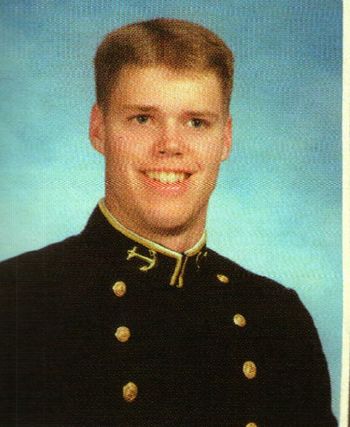 Lt. Bret Travis Miller, 30, of East Troy, died Wednesday while flying a training mission over the gulf coast of Texas. He was born the son of Rick & Judy (Neumann) Miller, the youngest of three children. Bret grew up in East Troy. He graduated from East Troy High School with the class of 1997. He was well known for his academic and athletic achievements. He was a National Honor Society Scholar as well as the school's all-time leading scorer in basketball. Bret was a four time varsity letter winner in golf and basketball and graduated with high honors. Bret earned an appointment to the United States Naval Academy in Annapolis, MD, where he graduated with the class of 2001. He continued to play basketball and earned a bachelor of science degree in ocean engineering. Upon graduation from USNA in 2001, Bret discovered his love of naval aviation. He attended primary flight training at VT-28, followed by advanced multi-engine training at VT-31, where he earned his Wings of Gold. Following additional training at the FRS, he reported to the War Eagles of VP-16 for his fleet tour. Bret earned qualifications as patrol plane commander, FCF pilot, mission commander and instructor pilot and successfully completed two deployments. Bret was a leader and a professional in every sense. He essentially held every qualification in the T-34.

Lt. John Joseph Houston of Houston [TX] and Lt. Bret Travis Miller of East Troy, Wisc., left Naval Air Station Corpus Christi on a routine training mission Oct. 28 in the area of Rockport-Aransas County Airport. The pilots lost communication with the base tower and a search-and-rescue effort began soon after.

Bret was a member of Training Squadron (VT) 27.

My heart aches for those thoughts that Bret must have had about our sons, one of which he never got to meet. Brianne Miller

From researcher Kathy Franz: "Bret earned honorable mention for all-State Wisconsin basketball and was a three-time All Southern Lakes Conference player. He made five 3-pointers in a March 1997 game against Union Grove. As a 6’ 2” senior guard, he was being courted by UW-Parkside and a host of other schools. His game-high of 18 points came in a game against Westosha."

LT John Houston '02 was also killed in this crash.

Bret is one of 3 members of the Class of 2001 on Virtual Memorial Hall.

The "category" links below lead to lists of related Honorees; use them to explore further the service and sacrifice of the alumni in Memorial Hall.
Retrieved from "http://usnamemorialhall.org/index.php?title=BRET_T._MILLER,_LT,_USN&oldid=136573"
Categories: