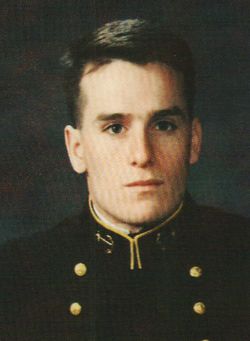 Captain Brian Michael Smith, USMC, died in an F/A-18D Hornet crash off the coast of Cherry Point, NC on 15 September 1997. He was the pilot of a two-seat F/A-18 that went down in the bay just short of the Piney Island range during routine night bombing operations.

A memorial service was held at MCAS Beaufort on 19 September and the funeral was held in Elyria, OH on 29 September. He is buried at St. Mary's Cemetery in Elyria.

Brian graduated from high school in Nashville, TN prior to enrolling in the Naval Academy. He graduated in 1991 and selected Marine Corps Aviation. He married Maria Rutkowski, a 1991 graduate of the US Air Force Academy, in June of 1991. Brian completed TBS in Quantico, VA, Aviation Indoctrination and Primary Flight Training in Pensacola, FL, then completed Intermediate and Advanced Jet training in Kingsville, TX. He earned his Wings of Gold in August 1994 and selected F/A-18s. After one year FRS training in VFA-106 at NAS Cecil Field, FL, he was assigned to VMFA-224 in MCAS Beaufort, SC. He has been with the Bengals for over two years, serving two deployments to Aviano, Italy.

Brian is survived by his wife Maria who gave birth to their baby daughter, Theresa Marie, 4 days after his death. His parents, Mike and Joanne Smith, currently reside in Prospect, KY. His brother, Kevin Smith, lives in Van Nuys, CA with his wife Amy.