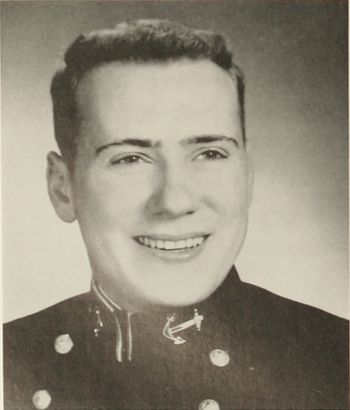 Bruce hails from right outside Boston and calls Milton his home town. It was there that he was born and attended elementary and high school. Always having had the desire to fly, he entered Canoe U. after attending Boston University for a year. He is known for his fierce game of tennis and his New England accent. Bruce is certain to be a welcome addition to those who serve in the Air.

Bruce hails from right outside Boston and calls Milton his home town. It was there that he was born and attended elementary and high school. Always having had the desire to fly, he entered Canoe U. after attending Boston University for a year. He is known for his fierce game of tennis and his New England accent. Bruce is certain to be a welcome addition to those who serve in the Air.

It is with deep regret that we announce the death of Bruce Halliday, who was killed when his aircraft, an AD-6, went into the water after a deck launch from USS Independence (CV 62), operating in the Caribbean. He leaves behind him a widow, Diane, and a 15-month-old baby boy. Bruce was a soft-spoken and modest guy who went to the Academy with one goal in mind, which was to become a Naval Aviator. We grieve his loss but at least we can say he died doing what he thought was most important in life — flying. Shipmate, January 1963

Bruce's son is named Brett. He was also survived by his parents and two sisters. (One sister, Mrs. Barbara Ann Hansen, died in 2018. His other sister, Jane, is still alive as of August 2019.)

The location given is midway between Jamaica and the southernmost point of Cuba. The Cuban Missile Crisis had concluded barely two weeks earlier.

He is listed on the In Memoriam page of Independence's 1962 cruise book.

In the course of my Ancestry research, I’ve started to write sonnets (not great poetry, but they get the job done) to honor and preserve the memories and stories of my ancestors and relatives. Bruce and I shared great-grandparents Capt. John Halliday and Annie Rowan, so in addition to the poem I’ve written for Bruce I’m including the one I wrote about the immigration of Annie Rowan, the new young wife of John Halliday who was I believe the first mate of the commercial vessel she came over on. Feel free to do with them as you will. Read and delete if you like. I just wanted you to know that your help and concern for these Navy men of the past is appreciated and will help to spread their legacies.

The fall of nineteen sixty-two was tense;
The Russians found in Cuba off our shore,
With missiles prepped for deadly nuclear war,
The U.S. moved to mount a strong defense.
The naval blockade lasted thirty days;
Our bombers at the ready, showing force,
Caused Russia to withdraw, reverse her course;
But no narration easily conveys
The sadness and the sorrow at the loss
Of one soft-spoken pilot, crashed on launch
In service of his country. Shipmates staunch,
With Corry, DuPont, Roan, searched sea across;
But miles below, this Navy pilot true
Will fly forever in the tropic blue. Deborah L Halliday, August 2019

The ship left Liverpool that autumn date,
Her cargo salt, and New York docks her goal;
The only woman, wife of the ship’s mate,
Had morning sickness beyond ocean’s role.
A few days out there came a thrashing storm—
In howling wind and waves a crewman died—
In their best dress, a service to perform,
Amidst the gale, a burial topside.
The ship survived, with spars and sails rent,
But far off course, with minimal control;
Provisions low, adrift for weeks she went,
Was listed “Lost at Sea” by Lloyd’s – but sole,
The crippled ship attained St. Thomas Isle,
And rested there, in profound thanks the while. Deborah L Halliday, September 2018

Bruce is one of 28 members of the Class of 1960 on Virtual Memorial Hall.

The "category" links below lead to lists of related Honorees; use them to explore further the service and sacrifice of the alumni in Memorial Hall.
Retrieved from "http://usnamemorialhall.org/index.php?title=BRUCE_HALLIDAY,_LTJG,_USN&oldid=88383"
Categories: