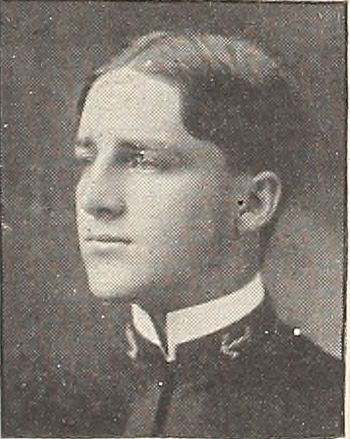 A man quite carried away by the contemplation of his own blasé disposition, unusually unfortunate in his dealings with the discipline department. A great exponent of the 3d conduct grade. Has discovered many things since coming here; principally, that the world is wicked. Talks much and vehemently. Great golf fiend and devourer of shredded wheat biscuits.

A man quite carried away by the contemplation of his own blasé disposition, unusually unfortunate in his dealings with the discipline department. A great exponent of the 3d conduct grade. Has discovered many things since coming here; principally, that the world is wicked. Talks much and vehemently. Great golf fiend and devourer of shredded wheat biscuits.

Caspar Goodrich, son of Rear Admiral Caspar F. Goodrich, was born in Italy. Goodrich was appointed a midshipman from Connecticut on 7 September 1897. He was designated a Naval Cadet 10 June 1901 and reported to Lancaster for duty. From 1903 to 1905 Goodrich served in Maine, Cleveland, and Chicago. Assigned to Georgia on the Atlantic Station in June 1906, Goodrich was killed 15 July 1907. He was the command officer of the after superimposed 8" gun turret when a flare back caused 104 lbs. of powder to explode behind the starboard gun. Ten men were killed, including Goodrich. Eleven men were injured.

Caspar is buried in New Jersey.

USS Goodrich (DD 831) was named for Caspar and his father; the ship was sponsored by his mother.

Faulkner Goldthwaite '07 and James Cruse '07 were also lost in this explosion.

A plaque in Memorial Hall in honor of Caspar and the nine other officers and men lost was erected by "their shipmates on the Georgia and sympathizing friends on the U.S.S. New Jersey."

Others at this command: MIDN Faulkner Goldthwaite '07 and MIDN James Cruse '07

Caspar is one of 4 members of the Class of 1901 on Virtual Memorial Hall.

The "category" links below lead to lists of related Honorees; use them to explore further the service and sacrifice of the alumni in Memorial Hall.
Retrieved from "http://usnamemorialhall.org/index.php?title=CASPAR_GOODRICH,_LT,_USN&oldid=104380"
Categories: