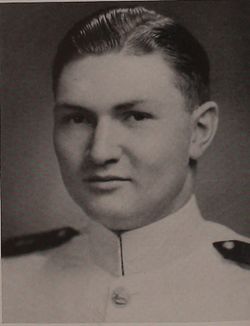 With a personality as easy-going and gentle as the plains of Kansas, Lere made many friends at the Academy. Always a good man in a bull session, he never neglected to advance his opinions strongly. Basketball held his main interest in sports during the long weeks of the winter, and the week-ends found him pursuing the art of dragging, although he has yet to discover that certain one. Lere never was quite won over to the system, for formation bells invariably found him still with one foot in the shower and a shirt still to be rigged.

The Class of 1947 was graduated in June 1946 due to World War II. The entirety of 2nd class (junior) year was removed from the curriculum.

According to his [brother's obituary, Charles was lost "going down with his aircraft" in Pensacola in 1950. Cannot find any other details of his loss or his burial location.

Lawrence Larzalere ’55 was his brother.

Retrieved from "http://usnamemorialhall.org/index.php?title=CHARLES_R._LARZALERE,_LTJG,_USN&oldid=18576"
Categories:
This page was last modified at 06:54 on 10 June 2020.
About USNA Virtual Memorial Hall