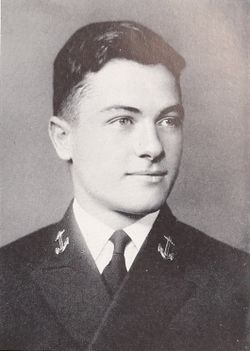 A love of sailing and blue water brought Don to the Naval Academy from the shores of Lake Erie. Born with a tiller in his hand, he early demonstrated his superior nautical ability by winning the Thompson Trophy sailing race Youngster year. Anything from a washtub to an oyster boat moves faster and more dexterously with Don at the helm. A constant booster of sailing here at the Naval Academy, his ambition is to abolish afternoon classes to get in more racing before the evening calm. Don gives the Navy an officer whose academic knowledge is grounded in a keen sense of practical seamanship.

The President of the United States of America takes pride in presenting the Silver Star (Posthumously) to Lieutenant Donald S. Scheu (NSN: 0-85047), United States Navy, for gallantry in action while serving as Gunnery Officer aboard a United States Submarine during war patrols in enemy-controlled waters during World War II. Lieutenant Scheu performed his duties courageously and with expert skill, thereby contributing to the sinking or damaging of many thousands of tons of enemy shipping.

Memorial Hall lists him as a LT, but multiple other sources have him as a LCDR.

Retrieved from "http://usnamemorialhall.org/index.php?title=DONALD_S._SCHEU,_LCDR,_USN&oldid=22059"
Categories:
This page was last modified at 12:57 on 21 September 2021.
About USNA Virtual Memorial Hall