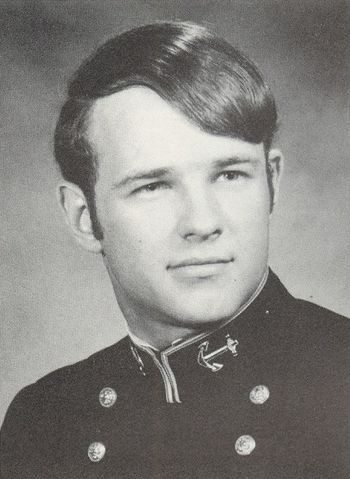 Beamer left Vale, N.C. in September ’69, and came to Canoe U via Columbian Prep. Doyle has grown accustomed to northern life, but "Carolina on My Mind" still brings a tear to his eye. Never one to waste time, Doyle diligently studied his Systems while freaking-out to the latest Merle Haggard hit and dreaming of his "Redneck" yellow ‘vette and a fresh poke of Redman chewing tobacco. Marine green and an F-14 tomcat will be Doyle’s graduation present.

Beamer left Vale, N.C. in September ’69, and came to Canoe U via Columbian Prep. Doyle has grown accustomed to northern life, but "Carolina on My Mind" still brings a tear to his eye. Never one to waste time, Doyle diligently studied his Systems while freaking-out to the latest Merle Haggard hit and dreaming of his "Redneck" yellow ‘vette and a fresh poke of Redman chewing tobacco. Marine green and an F-14 tomcat will be Doyle’s graduation present.

From the Wilmington Morning Star on September 22, 1981, Doyle was killed in an AH-1T (Cobra) crash near Cherry Point, North Carolina, on 18 September 1981. He was a member of Marine Attack Helicopter Squadron 269.

From The Charlotte Observer on September 23, 1981:

...the men's helicopter left on a night training mission from Bogue Field near Swansboro. On the way to the Cherry Point base the aircraft, which was flying with three other helicopters, turned away from the flight formation and disappeared from view.

Part of the main rotor blade, an engine cover and a helmet were recovered Saturday morning....

As sailors and marines continued a search of a 10-mile area of the sound for the second missing marine, Tim Johnson, one of Beam's friends and a neighbor of his parents, said hundreds of friends stopped by to visit and console Beam's parents in Vale....

Beam was graduated from West Lincoln High School in 1969 and from the US Naval Academy at Annapolis, Md, in 1974. He was a wrestler at both schools.

Dean Heavner, principal at West Lincoln High School who taught Beam in an advanced math class, said the marine was an all-A student.

"He set his goals and then accomplished them," Heivner said. "He was an excellent student and an outstanding wrestler."....

"He liked flying and he liked traveling," Johnson said. "He liked the challenge of being a helicopter pilot, and he liked what he was doing — helping his country."

Beam visited his mother and father in Vale earlier this month, returning to Cherry Point on Labor Day. He had planned to return in a couple of weeks and see the National 500 race at Charlotte Motor Speedway.

Doyle was survived by his wife Kathie, and his parents, Mr. and Mrs. Pence Beam. He is buried at the Cedar Grove Lutheran Church Cemetery in Vale, NC.

From an article in the Lincoln Times on March 30, 2016, about Doyle's mom Pauline on the occasion of her 100th birthday:

In 1951, the couple had their first and only child, a son named Doyle.

“I was very excited,” she said. “I worked so much that I couldn’t have a big family. I was determined to get Doyle out of the house so that he could be social. I wasn’t a big talker and his father was a quiet man. Anywhere that there was a gang of kids playing, I tried to involve him. I can remember him saying in high school that he felt comfortable talking to anybody.”

Doyle became an Eagle Scout and was an active youth in the community. The family built a house, the same one that Beam lives in today. It was 1957 when they moved into their new home.

“That was about the time that the power (electricity) was coming through Lincoln County,” she said. “I can remember figuring out where we were going to put the plug in places in the house. It was a big thing back then.”

Doyle, a 1969 graduate of West Lincoln High School, entered the Naval Academy and reported to Annapolis, Maryland, where he met his future wife, who he married in 1970. They did not have children.

Beam remembers her son’s dedication to the things he was passionate about and how tenacious he was.

“I’m not saying this because he was my son but if Doyle started anything, he did it right and he finished it,” Beam said.

His mother remembers when she found out that her son was joining the U.S. Navy.

“I don’t know if it was the uniform that he liked or if it was the influence of my brother-in-law, who retired from the Air Force, but he was determined,” she said. “After he served his time with the Navy, he went and joined the Marine Air Corps. When he came home to tell us about it, I just asked him why he wanted to do that. He told me that the Marines moved faster than the Navy and he was in a hurry to build his career as fast as he could. That was his answer.”

She remembers getting frequent phone calls from her son. One that she particularly remembers came from Buffalo, New York.

“He told me that it was snowing so hard that he couldn’t see three feet in front of his face,” she said. “He had never seen snow like that. Some of the boys were stranded there and they were in an office together when he called me.”

When asked where her son got his drive and determination from, Beam smiled and said, “I wonder.”

On Sept. 18, 1981, Doyle was killed in a helicopter crash during a training mission. The aircraft was based at Cherry Point Air Station at New River, adjacent to Camp Lejeune. Also lost in the AH-1T Gunship helicopter with Capt. Doyle Beam was First Lt. David Trundy. The aircraft disappeared 17 miles northeast of Cherry Point.

“It happened on Friday night but it was Saturday when we heard about it,” Beam said. “My husband and I had gone to Lincolnton for the Apple Festival. When we got home late in the evening, the first thing I did was turn on the television to hear the news. That is exactly what I was hearing about on the news, this helicopter crash. I told Pence that a helicopter was missing and it is exactly where Doyle was supposed to be. So, I called and we got in touch with Cathy (Doyle’s wife) and she told me that they were hoping to find him before they let us know. They found Doyle 11 days later. Thirteen years later to the day, also on Sept. 18, I lost my husband to lung cancer. They both passed away late in the evening on that date.”

Beam said that those losses are as hard for her today as they were then.

“You better believe it’s tough, it’s still tough,” she said. “When we lose those that we love, our family, it never gets easier.”

David Trundy '78 was also lost in this crash.

Doyle is one of 8 members of the Class of 1974 on Virtual Memorial Hall.

The "category" links below lead to lists of related Honorees; use them to explore further the service and sacrifice of the alumni in Memorial Hall.
Retrieved from "http://usnamemorialhall.org/index.php?title=DOYLE_H._BEAM,_CAPT,_USMC&oldid=114980"
Categories: