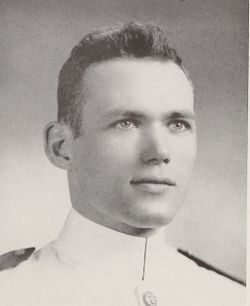 V-5, V-12, and N.R.O.T.C. helped prepare Ed for the Naval Academy where he easily built a reputation as the most regulation man in the Brigade. Many a Plebe was saved the trouble of coming around to an upperclassman's room by Ed's knowledge of anything from the number of links in a YP's anchor chain to Stalin's personal valet. He was active in athletics during his Naval Academy days, being a member of both the Varsity Track and Wrestling Teams. Ed realized his childhood ambition in graduating from the Naval Academy.

He flew 118 missions in Korea, where he served for over a year. Ed is buried in Illinois.

Kendall Gedney '50 was also a member of the 1st Company.