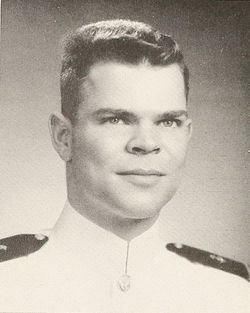 Ed gave up the sunny Southern California Beach town of Hermosa Beach to come East and take up studies at "that school" in Annapolis. Before leaving the Sunshine State, Ed put in carefree time at the University of California at Los Angeles where he seriously thought of the legal profession. Some may say that the Zeta Psi fraternity gave him his amorous qualities, but he claims he was born with them. During his youngster year he collected a majority of his mail at the hospital where they eventually came to regard him as a member of the staff. In the afternoon he could usually have been found competing in battalion football or the various company sports. Ed's capacity to take on all jobs will put him in good stead in his chosen career.

Memorial rites for Lt. Edward Haskell Tandy Jr. will be at 11 A. M. Saturday at St. Andrew's Chapel at the Naval Academy. Chaplain J. D. Zimmerman will officiate at the service.

Lt. Tandy was killed on May 29 when his jet fighter plane crashed into the sea off the coast of Santa Cruz, Calif.*

The 24-year-old Naval-Academy graduate was the son of Mr, and Mrs. Edward Haskell Tandy, of El Segundo, Calif. He was graduated in 1954.

Lt. Tandy was married to the former Jeanne Ford, daughter of Rear Admiral and Mrs. Walter C. Ford, of 148 Prince George Street. The Tandys' only child, Edward H. Tandy, III, was born July 11 at the Naval Hospital there.

His wife, Jeanne, remarried in June 1957 to another USNA graduate.

From Moffett Field Museum history of the base chapel:

The Greek monogram composed of the letter "Chi" (X) and "Rho" (P) form the medallion subject of this window. These intertwined letters "XP," are the equivalents of our own Latin letter "CHR," the first three letters of the Greek "CHRISTOS" (XPICTOC), or "CHRIST." This monogram, like the "I.H.C" of the opposite window, was used on the early Christian tombs in the Roman catacombs in the first century and has been used ever since as the symbol of Christ, "the anointed one." The small medallion contains the insignia of Composite Squadron THREE, the sponsoring activity for this particular window, in honor of VC-3 personnel who lost their lives in the service of their country.

The initial chairman of the COMPRON THREE Chapel Window Fund, LTJG E. H. Tandy, USN, lost his life under tragic circumstances. His plane disapperaed near the California coastline after encountering difficulty on a routine training flight. Many friends, both civilian and military, contributed generously toward the window in honor of the memory of this outstanding young aviator.

Retrieved from "http://usnamemorialhall.org/index.php?title=EDWARD_H._TANDY,_JR.,_LTJG,_USN&oldid=13719"
Categories:
This page was last modified at 14:15 on 23 March 2017.
About USNA Virtual Memorial Hall