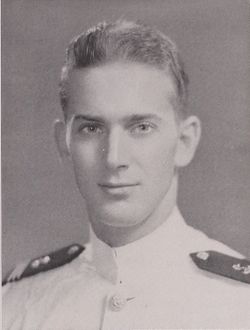 A staunch supporter of his home state, Jean will always take time out to tell you "how they do it back in Nebraska." Easy to talk to, and a grand person to live with, he made many close friends, both among those at the academy and the drags he favors on the weekends. An athlete of no mean ability, he played basketball, winning three awards, and helped out the battalion track team. Besides being an athlete, he has, by his efficient way of doing things well, earned the unjust reputation of being somewhat of a cut-throat. Jean is sure to be a success as an officer and we sincerely hope to be his shipmate someday.

He was commander of 3rd Company for the first set and a member of the basketball team.

Eugene was lost when USS Cushing (DD 376) was sunk early on the morning of November 13, 1942 during the Naval Battle of Guadalcanal.

He has a memory marker in Nebraska.

Retrieved from "http://usnamemorialhall.org/index.php?title=EUGENE_J._HUNTEMER,_ENS,_USN&oldid=20335"
Categories:
This page was last modified at 16:49 on 13 June 2022.
About USNA Virtual Memorial Hall