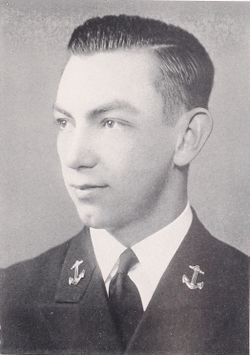 A genial, carefree, nonchalant friend is Fred. Generous to a fault, he will lend you his last nickel and will give you his last skag. Getting a good start at Georgia Tech, he has been leading the Academic Department a merry chase ever since. But Fred is at his best with his pipe, his gun, and an old hound dog, and many are the reminiscences that shortened our long winter evenings. Not being in the red clay of Georgia very often since he turned sailorman, he has contented himself with showing the rifle team how it should be done. With his Southern drawl and his contagious smile. Fred can never go far wrong.

Retrieved from "http://usnamemorialhall.org/index.php?title=FRED_F._MALLORY,_ENS,_USN&oldid=21995"
Categories:
This page was last modified at 14:28 on 26 August 2021.
About USNA Virtual Memorial Hall