Difference between revisions of "GEORGE A. WILDRIDGE, JR., LT, USN" 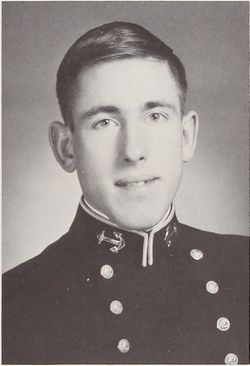 Buck came to Navy from Newark, New York. Through his four years here he has shown great enthusiasm for gymnastics. Starting with the first battalion team, where he took first place on the rings and second place on the high bar, he has been out for gym for all but one set, working his way up to varsity level. But his interest has not been in gymnastics alone. He has participated throughout in Antiphonal Choir and has sailed on the schooner Freedom. Academically, his interests lie in mechanics. Mathematics and Marine Engineering and he is particularly interested in hull design. Buck is best known for working hard at everything from academics to sports and extracurricular activities.

Ltjg Wildridge was the copilot of an SH-3G helicopter assigned to HC-1 that crashed off MIDWAY's bow on take-off for an SAR mission. Him and two other crewmembers on board are killed. The helicopter was supposed to get underway to the crash site of two other MIDWAY aircraft that had a mid-air collision. Involved in the mid-air collision were an A-7A (VA-56) and an EA-6A (VMCJ-1).

Retrieved from "http://usnamemorialhall.org/index.php?title=GEORGE_A._WILDRIDGE,_JR.,_LT,_USN&oldid=8570"
Categories:
This page was last modified at 09:37 on 24 February 2017.
About USNA Virtual Memorial Hall