George Mansfield Totten was admitted to the Naval Academy from New Jersey on September 27, 1862 at age 15 years 6 months. 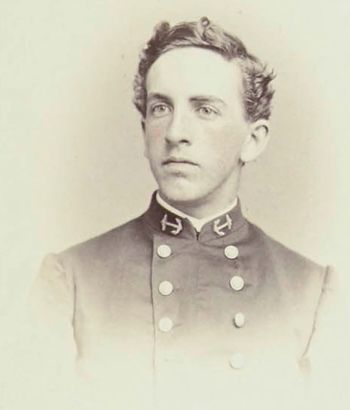 Unable to find any details about George's loss, except that it occurred on May 28, 1888 aboard the steamship Tallapoosa (1863) while that ship was in port Montevideo, Uruguay. He was the ship's executive officer; Tallapoosa was the flagship of the South American squadron, and had been in Montevideo since December 1887. (The 1888 Annual Report of the Secretary of the Navy includes ship movement details but does not mention any officers or crew.)

George is buried in Montevideo. (Researcher Kathy Franz received a response from the cemetery, but it does not have a cause of death either.)

Date of birth from his 1887 application for a passport, which gives a physical description:

Lieutenant-Commander Totten was born in the District of Columbia. He entered the Naval Academy In 1862. His first sea service after leaving the Academy was on the Ossipee, of the North Pacific Squadron, to which vessel he was attached from 1867 to 1869. He became an ensign In 1868, a master In 1869 and a lieutenant in 1870. From 1870 to 1871 he was attached to the Colorado, the flag ship of the Asiatic Fleet In 1873 and 1874 he was stationed at the Hydrographic Office in Washington. From 1871 to 1877 he was attached to the Swatara, of the North Atlantic Squadron. His next sea service was as first lieutenant of the Tennessee, flagship of the North Atlantic Squadron, which he Joined In 1879. In [garbled] he was made executive officer of the Tallapoosa, which was sent in that year to the South Atlantic Station. Mr. Totten was an able officer, whose genial manners made friends for him everywhere.

It seems he was a member of the US Naval Institute as of 1874.

There was a LT "George M. Totten" who appears in searches as a designer of a surfboat used for the invasion of Veracruz in 1847. This is a different man.

George is one of 5 members of the Class of 1866 on Virtual Memorial Hall.

The "category" links below lead to lists of related Honorees; use them to explore further the service and sacrifice of the alumni in Memorial Hall.
Retrieved from "http://usnamemorialhall.org/index.php?title=GEORGE_M._TOTTEN,_LCDR,_USN&oldid=120865"
Categories:
Hidden categories: