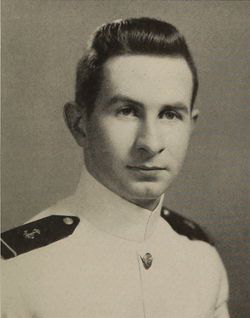 Dalton, Massachusetts, in the heart of the Berkshire hills, claims Gil Kirk as one of the home town boys who made good. After attending Dalton High for two years, where he played football, he transferred to Wilbraham Academy, where he played tackle on the football team and worked at the field events on the track squad. Gil enlisted in the Navy during his senior year there, and eventually wound up at Dartmouth in the V-5. We received him here via NAPS to go into the brigade late in the summer of 1945 with the tailormades barely off his back. Gil's main claim to fame lay in his membership on the 1946 championship interbattalion pushball team, his football career having been held down because of injury. He was best known for his ability to tease, living up to his Irish ancestry.

Gil has a memory marker in Arlington National Cemetery.

He survived an ejection from his F-3 Demon on July 22, 1960, parachuting into water before being rescued by a helicopter.

His wife, Marjory, remarried in 1965; the announcement said she had four children. One of those, his son Phillip, was engaged to be married in 1989.

Retrieved from "http://usnamemorialhall.org/index.php?title=GILBERT_J._KIRK,_JR.,_LCDR,_USN&oldid=17882"
Categories:
This page was last modified at 15:28 on 5 February 2021.
About USNA Virtual Memorial Hall