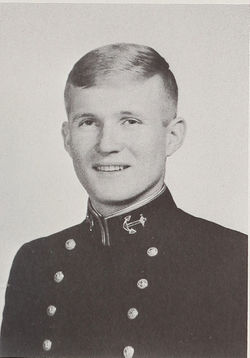 An A-7E Corsair II, assigned to Attack Squadron (VA) 72, suffered a mechanical malfunction and crashed shortly after launching from catapult No. 4. Lt. Cmdr. Harold Andersen ejected and the ship launched a motor whaleboat, assisted by a Sikorsky SH-3D from HS-11, to recover him. The Sea King crew dropped a swimmer to retrieve the pilot, but Andersen apparently had become entangled in his parachute and drowned.

Retrieved from "http://usnamemorialhall.org/index.php?title=HARALD_ANDERSEN,_LCDR,_USN&oldid=16246"
Categories:
This page was last modified at 14:14 on 7 October 2020.
About USNA Virtual Memorial Hall