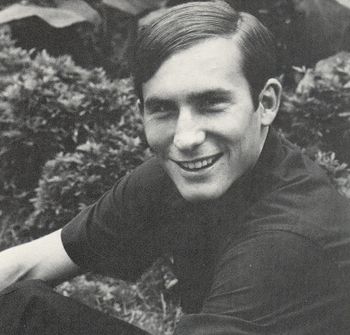 "Go Horns, Go!" Dubbed "Rad" from his earliest days at the Academy, James' love of football and sports in any area has been surpassed only by his affection for a sweet Texas girl who made the miles between Annapolis and Austin a minor barrier to happiness.

"Go Horns, Go!" Dubbed "Rad" from his earliest days at the Academy, James' love of football and sports in any area has been surpassed only by his affection for a sweet Texas girl who made the miles between Annapolis and Austin a minor barrier to happiness.

KEY WEST (AP) A Navy pilot was killed and three crewmen injured Tuesday when the anti-submarine helicopter they were flying on a routine training mission crashed in shallow water near here. The cause of the accident had not yet been determined, Lt. Dave Barron, spokesman at the Key West Naval Air Station, said Tuesday evening. "They were going to convene an investigation, which is routine." The pilot of the SH-2F Seasprite helicopter was identified as Lt. Cmdr. James C. Radney, 31. The injured men were identified as the co-pilot, Lt. Cmdr. William T. Boone, 32, of Neptune Beach, and enlisted crewmen Andrew Braithwaite, 22, of Thompson, Ga., and David B. Rogers, 20, of Cinnaminson, N.J.

From the October 1983 issue of Shipmate:

LCdr. James Calton Radney USN died on 28 September 1982 near Key West, Florida, in the crash of his SH-2 aircraft during an operational mission. Memorial services were held at Mayport Naval Station Chapel and interment was at Capital Memorial Park in Austin, Texas.

Appointed to the Naval Academy from the State of Texas, he was an active member of the 150 lb. football team and served as Twelfth Company commander before graduation with the Class of 1973. His academic excellence as a midshipman resulted in his assignment immediately after graduation to the Naval Postgraduate School in Monterey, where he received a master of science degree in oceanography in 1974.

Prior to flight training, he served on board USS KENNEDY (CV-67) as engineering officer and was qualified as both engineering officer and surface warfare officer. He also had the distinction of qualifying in two warfare specialties with his designation as a naval aviator in July 1979. He was assigned to Helicopter Antisubmarine Squadron Light THIRTY-SIX (HSL-36), where he served as a helicopter aircraft commander and officer-in- charge of Det 5 at the time of his death. He had been officer-in-charge of HSL-36 detachments aboard USS JOHN HANCOCK (DD98-I), USS PHARRIS (FF-I094) and USS NICHOLSON (DD-982), and was awarded the Navy Achievement Medal for his role in special operations conducted while aboard PHARRIS. He was in receipt of orders to be flag lieutenant for Commander Naval Forces Caribbean at the time of his death. He was a member of the Naval Academy Alumni Association.

He is survived by his widow Cindy Salcher and son Derek Emerson, of Neptune Beach FL; his parents, Ridgley Dexter, a former Navy pilot, and Jo Ann; a brother Larry, a former Navy dentist, and sister Kelly.

James is one of 10 members of the Class of 1973 on Virtual Memorial Hall.

Retrieved from "http://usnamemorialhall.org/index.php?title=JAMES_C._RADNEY,_LCDR,_USN&oldid=134453"
Categories:
This page was last modified at 00:12 on 4 November 2020.
About USNA Virtual Memorial Hall