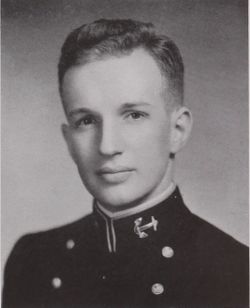 "Jamie-Boy" was one of the few men who went along as smoothly over the rough spots of academics as he did over the smooth ones. Nothing held his attention long, but he did each job well. It was hard to decide which was more important to Jim, Cornell, Syracuse, or the Navy, but after three years the Navy has won out by a comfortable margin. He was the best possible roommate, a likable fellow, easy going, always willing to help out in a pinch, or to listen to someone's troubles. Jim has a yen for light cruisers and with the one word that doesn't exist in his vocabulary "Defeat," you can bet that he will get along.

The Class of 1945 was graduated in June 1944 due to World War II. The entirety of 2nd class (junior) year was removed from the curriculum.

He was aboard a naval bomber and it accidentally collided with a fighter plane as they were both coming in for a landing.

The accident was on December 16, 1947, and occurred in the Norfolk, Virginia area.