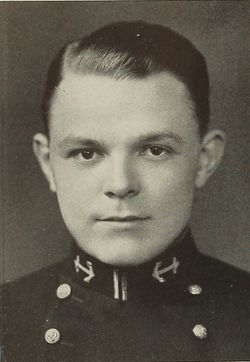 Jimmy was born and bred with the ideals that make the Service what we would have it. He is the exception that proves the rule concerning that familiar maxim on Navy Juniors. He has travelled far and has had many enviable experiences both in the Islands and the States. He can scarcely claim a home state, but by the same token he can claim almost any of them. From the moment he entered the Academy he has been all-Navy. Little Annapolis has found a tender spot in his heart, and Annapolis, too, has its secret yearning. Jimmy has a host of friends and proves himself the type that is willing to lend a hand and justify the attachment. We hope and expect to see his "four star" flying some day.

James was lost in USS Jarvis (DD 393) when she was attacked by Japanese aircraft on August 9, 1942, during the Battle of Guadalcanal.

His father was a member of the Class of 1914 and retired as a rear admiral.