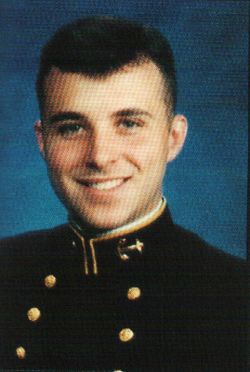 Captain Jason K. Meiners, 27 of Havelock, NC, formerly of Avon Lake, passed away, Saturday, February 3, at the Cherry Point Marine Corp Air Station following injuries he sustained in an aircraft accident. Captain Meiners was born, June 12, 1973 in Kansas City, MO and had lived in Havelock NC for the past year.

He was a 1991 Graduate of Avon Lake High School, where he was president of the Junior Class, Editor-in-Chief of the Yearbook, captain of the Soccer and Basketball teams, member and State Qualifier of the Track Team, and received the Kights of Columbus Athletic Award. In 1998, Captain Meiners was elected to the Avon Lake High School Sports Hall of Fame. Other High School achievements include being elected to Student Council, member of the Varsity Club, National Honor Society, Math-Science Club and Buckeye Boys State.

In 1996 Captain Meiners graduated with honors from the Naval Academy in Annapolis, MD where he, as a First Class Midshipman commanded the 3rd Company. After Graduation Captain Meiners was awarded the Marine Corp Burke Scholarship for his outstanding academic achievements. He was commissioned as a second Lieutenant with the United States Marine Corps, May 24, 1996 and reported to The Basic School (TBS), Quantico, VA. After TBS, Captain Meiners reported to NAS Pensacola for Naval Aviation Preflight Indoctrination Training. From there Captain Meiners went to NAS Corpus Christi, TX for Primary Fixed Wing Training. Having received high marks, Captain Meiners was selected for Basic/Advanced Jet training in Meridian, MS. He was winged a Naval Aviator on February 25, 2000 and reported to the "Hawks" of Marine Attack Training Squadron 203 at MCAS Cherry Point, NC in May 2000 for training in the AV-8B Harrier.

He was a tri-athlete and an avid reader.

Meiners' and Denson's TAV-8B training plane was landing at Cherry Point when the nose of the plane dipped. They couldn't correct it in time, investigators said.

Meiners' body was found in the wreckage, still strapped to his ejection seat. His body could not be removed immediately because of the risk that detonation devices still attached to his seat might explode. The wreckage was shielded from the rain with a tarp and protected by an honor guard until a special team arrived the next day.

His wife was three months' pregnant at the time. "Their little girl is inquisitive and outgoing, just like her father," said Carol Meiners, the pilot's mother.

Meiners, 27, was so determined to fly that he reapplied to the U.S. Naval Academy after being rejected the first time. He finished in the top 10% of his class and joined the Marines. "He liked the camaraderie of the group," Carol Meiners said, "how they stood up for each other and how they never left a man behind."

Jason is one of 4 members of the Class of 1996 on Virtual Memorial Hall.

The "category" links below lead to lists of related Honorees; use them to explore further the service and sacrifice of the alumni in Memorial Hall.
Retrieved from "http://usnamemorialhall.org/index.php?title=JASON_K._MEINERS,_CAPT,_USMC&oldid=45816"
Categories: