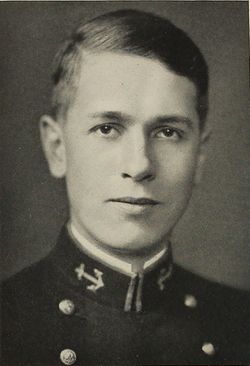 John is the perfect roommate and friend. His only vices are reading Esquire and living in Ohio during leaves. Johnny is the white sheep of the Black family and is undoubtedly the most vermillion of Red Mikes. However, he never gets blue; it's his indefinable attitude towards life that makes him look cheerfully on the system he is always trying to undermine. John follows amateur radio avidly and handles a fast transmitting key. He appreciates good music both classical and swing. The "Iron Man" is capable of horrible puns and grotesque cartoons. He is a strong football fan and sports prophet and spends his spare time proving Navy can beat Army by hundreds of points. John's perseverance will drive him to success. A real specimen—that man!!

Retrieved from "http://usnamemorialhall.org/index.php?title=JOHN_E._BLACK,_LTJG,_USN&oldid=25324"
Categories:
This page was last modified at 22:54 on 19 June 2022.
About USNA Virtual Memorial Hall