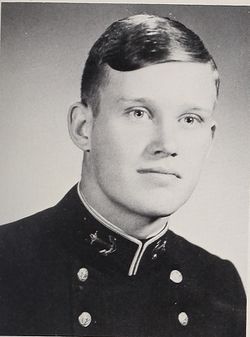 The two test pilots taken from the Hughes Helicopters YAH-64 Sunday have been identified as John E. Ludwig, 34, of Bonita and James W. Grouix, 37, of Carlsbad.

The body of 56 year old William L. Freeman of San Clemente was also retrieved from the remnants of the Army T-28 from which he was photographing the test flight when the two planes crashed Saturday about three-fourths off a mile of Seacliff Park.

Crash was on November 22, 1980. Unable to find burial site or any other details.

Together We Served and USNA Alumni Association both list him as a LCDR.

In "Rotor Review" (of the Naval Helicopter Association), Summer 2014 edition, Bill is featured in a long story about the development of what would become the LAMPS Mk III helicopter. The editor's note:

Jack Ludwig left the Navy to accept a job as test pilot with Hughes Helicopters. He was promoted to Chief test pilot but was tragically killed in November 1980 during an Apache AH-64 test flight.

Retrieved from "http://usnamemorialhall.org/index.php?title=JOHN_E._LUDWIG,_III&oldid=9466"
Categories:
This page was last modified at 13:59 on 27 February 2017.
About USNA Virtual Memorial Hall