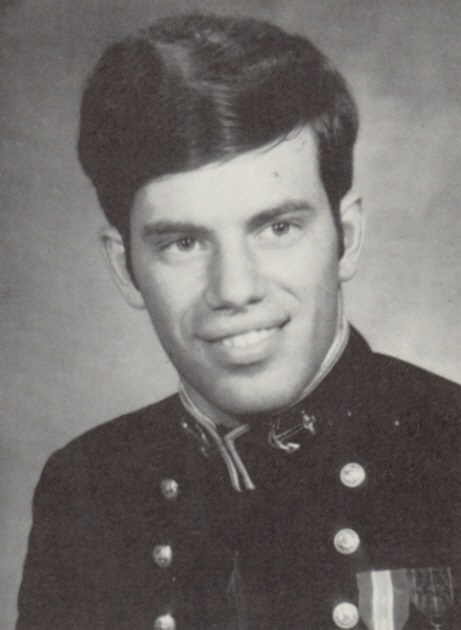 Lt. MacSwain was born March 3, 1952, in Merrill, son of Robert and Geraldine MacSwain, Merrill Route 2. He was married Oct. 27, 1977, in Honolulu, Hawaii, to Sandra Roble, who survives. He was a 1970 graduate of Merrill High School and a member of the state championship wrestling team that year, and was graduated from the U.S. Naval Academy in 1974. A member of the U.S. Navy, he was serving as an engineering officer aboard the USS Inchon. He was a member of the Naval Academy Alumni Association and St. Robert Bellarmine Catholic Church in Merrill. Surviving besides his wife, Sandra, and parents, Mr. and Mrs. Robert MacSwain, are four brothers, Steven, Black River Falls, Rob, University of Wisconsin - River Falls, and Donald and James, both at home; and a sister, Mary Jo MacSwain, Evanston, Ill.

John is buried in Wisconsin.

The Register of Alumni has no date of death, but lists him as deceased and also LT, Retired.

John is not listed with his classmates. He was identified by reviewing Shipmate magazine issues; his date of death and "Portsmouth VA" is given in the May 1979 issue.

John is one of 8 members of the Class of 1974 on Virtual Memorial Hall.

Retrieved from "http://usnamemorialhall.org/index.php?title=JOHN_P._MACSWAIN,_LT,_USN&oldid=105920"
Categories:
Hidden category:
This page was last modified at 12:43 on 28 October 2020.
About USNA Virtual Memorial Hall