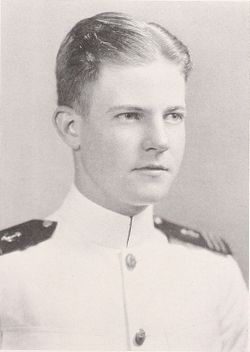 Aside from his habit of singing "Marching Through Georgia," he's been a fine roommate, having passed the acid test of having what you want to borrow when you want to borrow it. Plebe year he was dubbed "Rosy" and has constantly lived up to his name. He boasts the most entrancing blush east of the Rockies (you ought to see him on Saturday nights!) Quite snaky with the women, too, he has set an unprecedented record of dragging six out of seven weekends. A fiend at bridge but conservative at poker, he usually comes out ahead in both; and this is pretty typical of the results of all his doings — he gets the bacon. It's been fun to be around him, and great to know him.

His wife, Betty, was listed as next of kin.