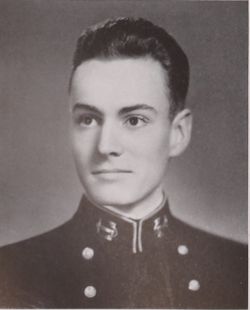 Plebe year, Jo thought he was still in Classical High School, but, as shown by the incredible number of fraps he acquired, the Executive Department thought differently. After exploiting the dubious joys of the Navy juniors for two years, he branched out First Class year and was frequently seen at the Hops guiding some queen about the floor on those P. T. boats he called feet. As an athlete, Jo sparked the Battalion track and crosscountry learns and spent many a Sunday morning on the tennis courts. During study hours, he was frequently seen with his nose in formidable volumes on obscure subjects like ornithology or Freud. An ability to "get the stuff" quickly and a clear professional mind should get Jo places in the submarine service.

He was a member of the 4th Battalion staff (1st set).

The Class of 1945 was graduated in June 1944 due to World War II. The entirety of 2nd class (junior) year was removed from the curriculum.

From At the Helm of USS America: The Aircraft Carrier and Its 23 Commanders:

In late 1955, Lt. Cdr. Joe Humes, the Ops Officer for VF-21, while recovering aboard Forrestal, just ahead of me, had a wire part. The cable wrapped around his tailhook, snapping his Fury inverted on the deck. Joe was killed instantly. His Fury slid up the deck and off into the water and disappeared. Capt. Donald D. Engen

This accident occurred on April 12, 1956 off the coast of Virginia.

Retrieved from "http://usnamemorialhall.org/index.php?title=JO_A._HUMES,_LCDR,_USN&oldid=19586"
Categories:
This page was last modified at 11:45 on 15 March 2020.
About USNA Virtual Memorial Hall