Difference between revisions of "MARK A. PRUSINSKI, LT, USN" 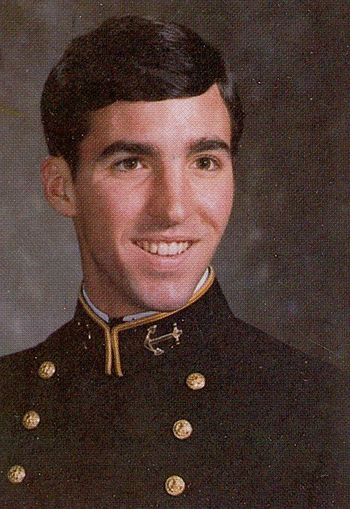 From the July/August 1990 issue of Shipmate:

Lieutenant Mark A. Prusinski USN, was killed in an aircraft accident during a routine training flight at Naval Weapons Center China Lake, California on 28 March 1990. Services were held at the NWC Chapel on 1 April and at Immaculate Conception Church, Columbia Heights, Minnesota on 4 April with burial at Fort Snelling National Cemetery, Minneapolis.

Born in Tarrytown, New York on 11 February 1962, he was appointed to the Naval Academy from the State of Minnesota and graduated with the Class of 1984.

Upon graduation, he entered flight training and was designated a Naval Aviator in April 1986 at NAS Meridien, Mississippi. After completing fleet replacement training in Attack Squadron 128 at NAS Whidbey Island, Washington, he joined the Milestones of Attack Squadron 196 flying the A-6E Intruder During this tour, he made two Western Pacific/Indian Ocean deployments on board USS CONSTELLATION (CV-64) and participated in the first "Earnest Will" operations escorting reflagged Kuwaiti tankers through the Persian Gulf. Assigned to the Naval Weapons Center since August 1989, he was flying both the A-6 and the QF-86 Sabrejet.

Survivors include his wife, Michelle, of Ridgecrest, California; his mother Joanne of Spring Lake Park, Minnesota; his brother Norman of Chaska, Minnesota; sisters Linda Sroufe of Federal Way, Washington, and Donna Sershen of Chanhassen, Minnesota; and his grandmother Mary Segretta of New York.

A Start Tribune article mentions Mark performed with the Naval Academy Glee Club and that he was studying for a master’s degree in mechanical engineering at the time of his death.

From the Many Point [Scout Camp] Staff Alumni Association via Google cache:

March 28, 1990 - U.S. Navy Lieutenant Mark A. Prusinski lost his life when his QF-86F Sabre crashed near Trona, between Ballarat and Wildrose Canyon. Mark was 28 years old.

The story is sad but it happened so long ago now that the pain has mostly faded for me. For my Mother, it can still be fresh.

Mark was a Test Pilot at China Lake in the Mohave. He was testing A6 Intruders. He was doing very well and had just gotten married on March 10, 1990. March 28th was his first day back at work and he took out the AF-86F. What ever happened, happened suddenly. What I remember is that the Navy said that Mark probably did a maneuver that was OK for the Intruder but not for the F86. When he tried to correct the problem, what they speculate is that he corrected for an Intruder and it wasn't the right thing to do in an F86. The crash was sudden and death was instant.

His wife Michele eventually came to live in Minnesota with my other brother and his family. Because she was from New Zealand, the Immigration Department people wanted her out of the country. She eventually had to leave and come back as a foreign student. We were not considered family. She is now in Bellingham, Washington. She had remarried and has a little girl Madeline.

I know Mark loved his time at Many Point. He always went full tilt in life. As it seems he did in death. I always am some what consoled that he died doing what he loved best...flying.

Mark is one of 9 members of the Class of 1984 on Virtual Memorial Hall.