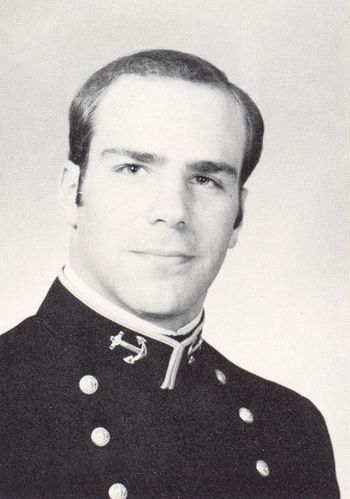 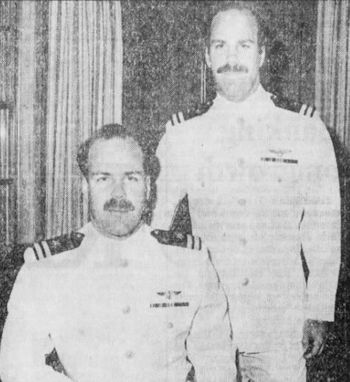 Mark was lost when his A-7 Corsair II, of Attack Squadron (VA) 22, collided with another A-7 on May 6, 1986 over the Pacific Ocean. He was on a low-level navigation training mission out of Lemore Naval Air Station; the other pilot, LT(jg) Brian D. Myers, was also killed.

From the July/August 1986 issue of Shipmate:

Lt. Mark R. Pohlmeyer died on 6 May 1986 while on a training flight from NAS Lemoore, California. He had been an Instructor Pilot with Attack Squadron 122 since April 1985.

Born in Pennsylvania, he was appointed to the Naval Academy from that state and graduated with the Class of 1979 with a degree in Aerospace Engineering. He entered flight training and was designated a Naval Aviator on 24 April 1981.

Mark is remembered on a memorial marker at the Trinidad Lighthouse Lost & Buried at Sea Memorials.

Mark is one of 15 members of the Class of 1979 on Virtual Memorial Hall.

The "category" links below lead to lists of related Honorees; use them to explore further the service and sacrifice of the alumni in Memorial Hall.
Retrieved from "http://usnamemorialhall.org/index.php?title=MARK_R._POHLMEYER,_LCDR,_USN&oldid=114263"
Categories: