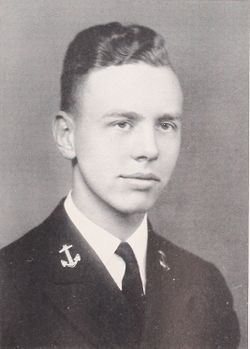 When he was a plebe. Marshall was plagued by some first classmen who thought that the son of an Army officer could do an admirable job of scrubbing our famous but malodorous goat. Giving earlY proof of his flair for opportunism, Marshall managed to be in the hospital when his would-be employers arrived. Ever determined to enjoy himself, he has shown remarkably good taste in his selection of drags. Had he studied a trifle more, his practical nature and common sense would have resulted in an even better scholastic record than the very respectable one he attained. No regrets from Marshall, however, he'll get by.

Marshall was lost in USS Oklahoma (BB 37) during the attack on Pearl Harbor on December 7, 1941.

A collection of Marshall's personal items was auctioned.