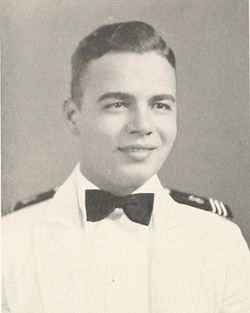 Wherever there is any noise around you can find Dick. He has a ready laugh that makes friends and keeps them entertained. He is never too busy to take a little time out to talk over some one else's special problem in the privacy of his "office," but it always ends with Dick getting the sympathy and advice, usually on his changing love affairs.

Michael was lost on July 30, 1945 when USS Indianapolis (CA 35) was sunk by a Japanese submarine.

The President of the United States of America takes pleasure in presenting the Silver Star to Lieutenant Michael Richard Pessolano (NSN: 0-123426), United States Navy, for conspicuous gallantry and intrepidity in action while in Command of a section of two Motor Torpedo Boats, which on the night of 13 - 14 November 1943, while patrolling close off shore of the Shortland Islands Group, was fired on by an enemy 3-inch shore battery. Lieutenant Pessolano immediately ordered his section to take evasive action, which his boat, the U.S.S. Patrol Boat Torpedo ONE HUNDRED FIFTY-FIVE (PT-155), did. However, on perceiving that the U.S.S. PT-154 had been hit and was near dead in the water, he returned to her assistance, laying smoke to screen her from the enemy searchlights and further shell fire. He then led the U.S.S. PT-154 to a point of safety where the enemy's guns and searchlights could no longer bear, transferred the dead and wounded to his own boat and since the U.S.S. PT-154's Commanding Officer had been severely wounded and her Executive Officer killed, Lieutenant Pessolano took command of the damaged boat and brought her safely back to port. Lieutenant Pessolano's actions were in keeping with the highest traditions of the United States Naval Service.

He was the commanding officer of Motor Torpedo Boat Squadron 9 from January 12 to August 1, 1944.