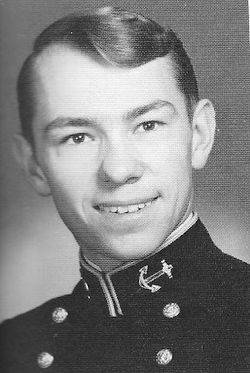 From FamilySearch (originally posted to USNA.com in a longer form):

Arriving at the Naval Academy in June 1967, I found the climate very much like my home in Texas - hot and humid. From day one, we did lots of marching and running which did not bother me at all. In fact, I was one of the very few Plebes who actually gained weight that summer. When you start out at six one and 120 pounds, you only have one way to go - up. We were introduced to the Physical Training program which included lots of swimming, a physical fitness test (push-ups, pull-ups, etc.), a mile run for time AND boxing.

Being more of a lover than a fighter, boxing was totally foreign to me. At some point during Plebe Summer, the entire company went to boxing class in Macdonough Hall. A couple of Marine Captains were in charge, and they told us to pair off by height and weight. As it turned out, the last two guys unpaired were Mike Zurfluh and I. All I knew about Zurf was that he was from Seattle, Washington, only stood about 5' 6" and had a very flat nose and I thought funny looking ears. One of the Marines said, "You two freaks fight each other." We got our boxing equipment which consisted of really big gloves and protective head gear. These items had been used by every class of midshipmen since Admiral Dewey was a plebe and they smelled something AWFUL! After each boxing class, it took two days of hard hand scrubbing to get the stink off. But this was our first experience so we suited up and got ready for our turn in the ring. With my height advantage, I felt confident that I could keep Zurf away from my vital areas and punch around on him at will. It didn't turn out that way. When the Marine rang the bell to start our match, Zurfluh came at me like a shot and hit me at least a thousand times before I could even get my hands up! It was a massacre.

I did survive somehow; I think God made Zurf show some pity on me. I was helped out of the ring and Zurf was signed up then and there for the Brigade Boxing Team as a lightweight. Then and only then did Zurf let it be known that he had been a Golden Gloves champion in Seattle! The teaching point for that first boxing class was to watch out for short guys with flat noses and funny looking ears..."

I only saw Zurf one time after graduation. He married his sweetheart and went to flight school. Shortly before I deployed on my second cruise to Vietnam, I was invited to dinner by Zurf and his bride at their quarters on NAS Barbers Point, Hawaii. Zurf was flying A-4s for a composite squadron stationed there. Another classmate and company-mate, Marine Lieutenant George Rogers and his wife were also invited; and a grand time was had by all. Some time later during the cruise, I learned that Michael Zurfluh had died in a training flight accident in the Hawaiian Op Areas. The Navy had lost a fine officer. The world had lost a true gentleman and a wonderful human being. Captain M. W. Newman '71, USN (Ret.)

Using information from Captain Newman's remembrance and his date of death from USNA 1971, it appears that Mike was a member of Fleet Composite Squadron (VC) 1, based at Barbers Point, HI. He was most likely piloting A-4 BuNo 153473 which crashed on June 2, 1975.

Retrieved from "http://usnamemorialhall.org/index.php?title=MICHAEL_T._ZURFLUH,_LT,_USN&oldid=8050"
Categories:
This page was last modified at 15:24 on 21 January 2021.
About USNA Virtual Memorial Hall