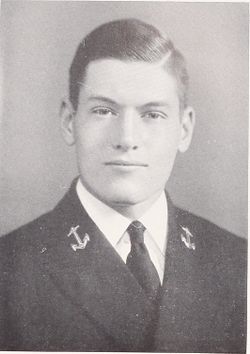 For the past four years Milt has been an ideal companion, loyal, understanding, and, above all, dependable. He has never been menaced by academics, which his carefree nature and natural ability have permitted him to take in his stride. "Mo" spends a good many of his recreation hours athletically, engaging in tennis, swimming, golf, basketball, and workouts in the gym, all for the sheer sport of it. He drags often and well, but he has, as most of us, a soft spot in his heart for the "one and only." "Mo" insists on singing, not only in the shower, but also as he cleans up the room, but after four years we are inured to it. Yes, we'll even miss it.

Lieut. Milton Leon Jarrett, Jr., USN. 26; son of Mr. and Mrs. Milton Jarrett of Huntington. W. Va.. was killed instantly Monday in the crash of a training plane at the Naval Air Station here, Navy authorities announced Tuesday. Jarrett was graduated from the Naval Academy at Annapolis in 1940 and reported for duty here May 29. Machinists Mate Albert Kessler Brown a passenger, was injured.