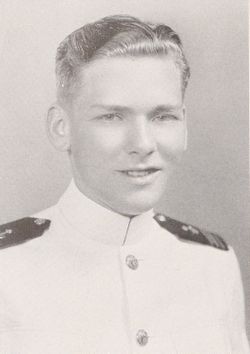 Chick has known his way around in the Navy since he was a little shaver, having been born with Navy in his blood. He goes about a job in a way that shows determination and something of the spirit of Farragut and his "Damn the torpedoes———." Chick shows a preference for "Crabs," but stags as often as he drags, {[a redeeming feature]}. The radiator is too uncomfortable, so Chick can usually be found near a lacrosse stick, his favorite sports companion. He is quiet and cheerful, traits especially appreciated in that black five minutes after reveille. The happy faculty of separating his work from his play makes him a good roommate. Combine with this a sense of humor and orderliness and there is the material for a successful officer.

All references to Morris list him as a Jr., except on the Class of 1939 plaque Memorial Hall. (Killed in action scroll in front of Memorial Hall is correct.)