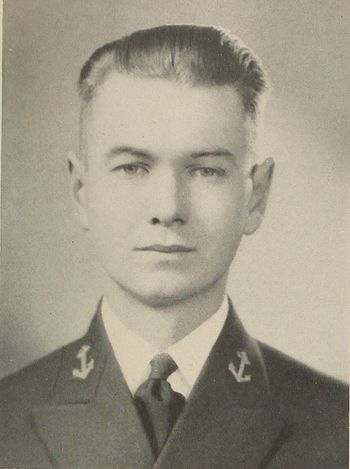 Plebe year, Pat admits, wasn't any too much fun, but necessary for the life to follow. However, the next three years showed him to be in the right place. As in days of yore at Polytechnic High, academics were fruit. His gymnastic talents, too, showed up to good advantage. Though not particularly a snake, Pat could be paged at Carvel any Sunday afternoon,—and usually be found! During four years here on the Severn, Pat has won a place in all our hearts. His ability to make friends and get along with people is a sure indication of success.

Plebe year, Pat admits, wasn't any too much fun, but necessary for the life to follow. However, the next three years showed him to be in the right place. As in days of yore at Polytechnic High, academics were fruit. His gymnastic talents, too, showed up to good advantage. Though not particularly a snake, Pat could be paged at Carvel any Sunday afternoon,—and usually be found! During four years here on the Severn, Pat has won a place in all our hearts. His ability to make friends and get along with people is a sure indication of success.

Patrick H. Hart was born in Manhattan, New York City, NY to Eugene James and Emma Elizabeth Carrell Hart who were married in Manhattan, NYC, NY on 09 Oct 1907. They also had another son, Eugene James Jr born about 1904. Pat, as he was sometimes called, attended Polytechnic High School in Los Angeles and graduated in May 1932. He was senior class president, President of the Ionian Society and President of the Scholarship Society.

Patrick took the Naval Academy entrance exam in the Spring of 1933 and passed among the highest in entrance examinations. He received a California Congressional appointment and entered the US Naval Academy on 13 Jun 1933. While at the Academy Hart was known as Pat and sometimes Bucket. His classmates wrote in the Lucky Bag yearbook, "Plebe year, Pat admits, wasn't any too much fun, but necessary for the life to follow. However, the next three years showed him to be in the right place. As in days of yore at Polytechnic High, academics were fruit. His gymnastic talents, too, showed up to good advantage. Though not particularly a snake, Pat could be paged at Carvel any Sunday afternoon, -- and usually be found! During four years here on the Severn, Pat has won a place in all our hearts. His ability to make friends and get along with people is a sure indication of success." As mention, Pat participated in gymnastics each year at the Academy, as well as, Quarterdeck Society, and gNt., He graduated with 327 other midshipmen and commissioned an Ensign on 3 Jun 1937.

His first sea duty tour on board the battleship USS Colorado (BB-45) began shortly after graduation on 30 Jun 1937. Later, according to the Naval History and Heritage Command, he served on board the battleship USS West Virginia (BB-48). He received orders on 03 May 1939 to report to the Commandant, Naval Air Station (NAS) Pensacola, FL to begin his flight training under instruction in June 1939. He also earned a sub-speciality as a French language interpreter. He completed his flight training and was awarded his naval aviator wings in the spring of 1940. On 28 May 1940, Ensign Hart, received orders involving flying to report for duty to Scouting Squadron 42 (VS-42). About the time he completed his flight training, he was promoted to Lt (Junior Grade) on 3 Jun 1940. On 24 Jun 1940, Ens. Hart received orders to report to Torpedo Squadron Three (USS Saratoga (CV-3)) rescinding the orders to VS-42. Several weeks later on 5 July 1940, he reported for duty with Torpedo Squadron Three (VT-3) embarked on Saratoga.

Saratoga was in a refit/overhaul status most of 1941, therefore, her attached squadrons, including VT-3, were based at various Naval Air Stations in Hawaii or the west coast. On 07 Dec 1941, Saratoga was entering San Diego to embark her air group, which were ashore while she was undergoing refit. Shortly after the attack on Pearl Harbor, Saratoga became the flagship of an unsuccessful American effort to relieve Wake Island. A few weeks later on 11 Jan 1942 Saratoga was torpedoed by a Japanese submarine. She steamed to Pearl Harbor for temporary repairs arriving on 13 Jan 1942. She returned to the Bremerton Navy Yard for permanent repairs on 09 Feb 1942. During the yard period Saratoga's embarked squadrons were transferred elsewhere. VT-3 was assigned first to NAS Pearl Harbor at Ford Island then to NAS Kaneohe Bay on Hawaii.

Hart was promoted to the temporary rank of Lieutenant on 02 Jan 1942 and became executive officer of VT-3 later that spring.

On 28 May 1942, the squadron was temporarily reassigned to the aircraft carrier, USS Yorktown (CV-5). Aviation squadrons from Air Group Three flew on board Yorktown shortly after she got underway from Pearl Harbor in company with the USS Hornet (CV-8) and USS Enterprise (CV-6). They steamed to a point on the navigation chart nicknamed "Point Luck" to await the arrival of the Japanese Striking Force, which was steaming from Japan to attack Midway Island.

About a week later on 4 June 1942, Lt Hart and his gunner ARM1 Johnnie Ralph Cole, took off from the Yorktown with other elements of the Yorktown air group to attack the Japanese Striking Forces approaching Midway. Although they had some friendly fighter protection enroute to their targets, VT-3 had to thread their way through a gauntlet of swarming enemy fighters and a hail of anti-aircraft fire. Of the twelve VT-3 torpedo planes that took off from the Yorktown that morning only two survived the attack, but had to ditch. Three of the four crewman survived and were rescued by friendly forces. Lt. Hart and Petty Officer Cole did not return from this mission, and they were listed as missing in action on 04 Jun 1942. Their remains were unrecoverable. On 17 Jun 1942, the Navy Department notified the family of Lt Hart via telegram that he was missing in the service of his country. On 5 Jun 1943, he was "presumed" dead.

He has a Find A Grave entry here.

Patrick is one of 45 members of the Class of 1937 on Virtual Memorial Hall.

Retrieved from "http://usnamemorialhall.org/index.php?title=PATRICK_H._HART,_LT,_USN&oldid=140502"
Categories:
This page was last modified at 16:55 on 29 July 2021.
About USNA Virtual Memorial Hall