{{LuckyBag|LBLink=https://archive.org/details/luckybag1937unse%7Cclass=1937 |picture=1937 Hart LB.jpg |LBName=PATRICK HENRY HART |LBHometown=Los Angeles, California |LBNickname="Pat" "Bucket" "Admiral" |LBText=Plebe year, Pat admits, wasn't any too much fun, but necessary for the life to follow. However, the next three years showed him to be in the right place. As in days of yore at Polytechnic High, academics were fruit. His gymnastic talents, too, showed up to good advantage. Though not particularly a snake, Pat could be paged at Carvel any Sunday afternoon,—and usually be found! During four years here on the Severn, Pat has won a place in all our hearts. His ability to make friends and get along with people is a sure indication of success. |LBECAs=Gym 4, 3, 2, 1, gNt, Captain 1. Black N. Quarterdeck Society. Three Stripes. 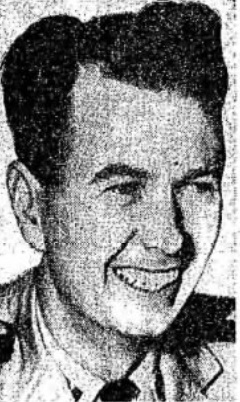 Patrick H. Hart was born in New York City to Eugene J and Emma Elizabeth Carrell Hart who were married about 1901. They also had another son, Eugene James Jr born about 1904. Patrick entered the US Naval Academy on 13 Jun 1933 with an appointment from California. He was graduated and commissioned an Ensign on 3 Jun 1937.

His first duty was aboard the USS Colorado (BB-45) began on 30 Jun 1937 Later, according to the Naval History and Heritage Command, he served aboard the USS West Virginia (BB-48). He began his flight training in Jun 1939 in Pensacola, FL. He also earned a sub-speciality as a French language interpreter.

About the time he completed his flight training, he was promoted to Lt (Junior Grade) on 3 Jun 1940. About a month later on 5 July 1940 he began his tour with Torpedo Squadron Three (VT-3) embarked USS Saratago (CV-3). He was promoted to the temporary rank of Lieutenant on 02 Jan 1942. After the Saratoga (CV-3) was torpedoed and had to return to the West Coast for repairs, Torpedo Three was transferred to Hawaii. On 28 May 1942 they were transferred to the USS Yorktown.

It was from the Yorktown that Torpedo Three flew into battle on 4 Jun 1942 against the Japanese striking force. Of the twelve planes that took off from the Yorktown that morning only two returned, but had to ditch. Three of the four crewman survived. Lt Hart and his gunner/radioman, ARM1 Johnnie Ralph Cole, were missing in action. Their remains were unrecoverable. They were declared presumed dead on 5 Jun 1943. Lt Hart was awarded for his heroism the Navy Cross and the Purple Heart medals.

Patrick is one of 45 members of the Class of 1938 on Virtual Memorial Hall.

Retrieved from "http://usnamemorialhall.org/index.php?title=PATRICK_H._HART,_LT,_USN&oldid=32471"
Categories:
This page was last modified at 16:49 on 13 June 2022.
About USNA Virtual Memorial Hall