Dunes grew up in the shadow of the Air Force Academy, but decided he liked his air salty, not thin, so he came to the Severn Shore. After carrying stars Plebe year, he has been hovering near the Superintendent's List ever since. Fall seasons saw Paul out with the 1 50's as a defensive back, and he spent his winters on the habitually successful company fieldball team. Never one to sweat about the system, Dunes was an easygoing type once off the athletic field, and he could be counted on to inject some humor into any serious situation. His one true love was the hills of Colorado, and his flame-of-the-moment's picture shared his tackboard with Western scenery. Dunes has decided to join the Corps as a Marine Aviator, where he will be a welcome addition and an outstanding officer. 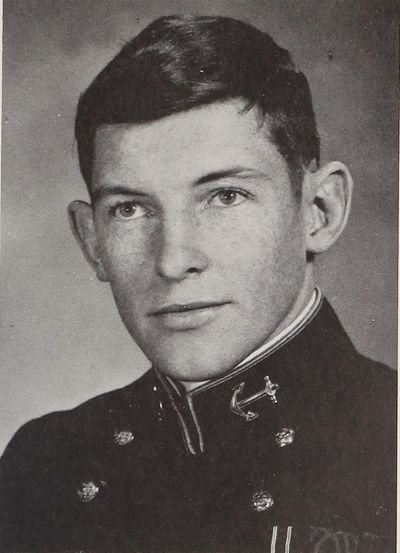 Retrieved from "http://usnamemorialhall.org/index.php?title=PAUL_V._DUNCAN,_CAPT,_USMC&oldid=4242"
Categories:
This page was last modified at 11:55 on 16 November 2020.
About USNA Virtual Memorial Hall