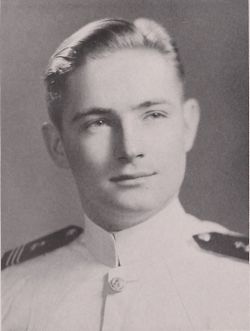 Phil's greatest moment was his receiving a certain telegram back on Christmas Day, 1938. It concerned his appointment. Agriculture? Medicine? Engineering? Nothing doing! Navy Blue and Gold for Phil! Next to Thermodynamics, he preferred blondes, tall and dreamy-eyed. In his youngster and second-class years, Phil, also dubbed "Post Mortem" and "Philip," developed an affinity for Miss Springfield, that might have been called passion. He liked the music of liberty call, and knew what to do on leave. As for music, he has a whim for martial airs and songs of good fellowship. Phil can't wait till he gets out on the deep blue sea.

Lieutenant Clow a member of the 16th fighter squadron went missing in action over China on November 19th 1944. He was flying in a P-51 mustang type F-51C-10-NT plane number 43-24970. It was reported that he crashed into friendly territory but no trace was ever found.

Of particular note is a personal letter on watermarked Army stationary addressed to his mother Mrs. Charles J. Clow that was signed by Carl Spaatz giving a determination of death and including some personal details about Lieutenant Clow such as “a reputation for ability and sound judgment” and “initiative and proficiency which marked him…”

He has a memory marker in Illinois.

Several of his uniforms, his purple heart, and some correspondence were at one point listed for sale.

It's unclear how Philip's career path took him to the Army Air Forces, or why he was only a 2nd Lieutenant. (He was not directly commissioned into the Army or the AAF.)

There are 74 photographs of the 16th Fighter Squadron in the collection of the Smithsonian National Air and Space Museum. They do not appear to be available online.