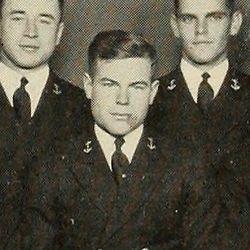 Philip Van Horn Weems, Jr., was lost, probably on July 1, 1943 (or possibly on June 29 or 30), likely on New Zealand, due to an "accidental death." (Some sources have killed in action). He was commanding officer of C Battery, 3rd Special Weapons Battalion, 9th Marines until that unit was detached from the 9th Marines shortly before he died. (From "The Ninth Marines, a brief history of the Ninth Marine Regiment:" "Shortly before the Ninth left New Zealand [on June 29, 1943], its reinforcing units were returned to their original organizations…" His company was assigned to the 9th Marines on January 1, 1943. His battalion was a part of the 3rd Marine Division.)

His niece (grand niece?) spoke with a historian in Annapolis, Denise Robinson, and provided a few fragments of information. She mentioned that the loss was possibly due to a jeep accident, but also that it occurred in Guam. Guam cannot possibly be correct; that island was in Japanese hands and an American invasion didn't occur for over a year after his death.

The jeep accident portion appears to be accurate, though; his father wrote that he understood Philip's death to be "largely an accident involving the motorized equipment in which he was moving."

"You would like to have been with us for the last week, I'm sure. Remember the time you made the rice butting when you, B [note: younger brother George "Bee" Weems] and I went camping in California? Some general in our outfit must have eben spying on us, for out latest training practically forced me to imitate your recipe. We were sent off on a three-day, 40 mile hike with heavy packs, half a sock of rice, and half the same of raisins. That was what we had to live on for the trip with two slices of bacon each meal for a teaser. If they will give me a few fish heads to practice on I should make an ideal Jap prisoner! My feet are full of blisters, needless to say. I tried to convince the Col. that my unit should make the hike in vehicles but the trick to keep me from walking didn't go over so well.

"As a unit commander, I believe I'm getting along fairly well. I'm too easy on the men but I hae a tough exec to even matters up. All of my J.O.'s are very new so I have to be the "voice of experience." It gives me real pleasure to try and train the J.O.'s to do the work without orders from me. One more year with them and I wouldn't have to do any work except to sign my name all day on the too numerous paper work we have to turn in. My unit has an excellent record to date so we are under pressure to keep it that way. Had an inspection by the Regimental C.O. the other day and with much luck and a few tricks of the trade we "turned out the best unit inspected so far in this country." One of the officers had listed all the Col.'s "pet hates" and what he had noticed wrong with previous units in his inspection tour. By specializing on the things most likely to be noticed we covered ourselves with glory. Naturally, I gave all hands (including myself) the day off."

From historian Richard Leonard via email on July 13, 2018:

The date of death is interesting in that 29 June 1943 was the day the 9th Marines loaded up in transports in New Zealand for passage to Guadalcanal, arriving there on 7 July. The 9th Regiment did not go into action until 1 November 1943 in the invasion of Bougainville. See Strobridge, Truman R., A Brief History of the 9th Marines, Historical Branch, G-3 Division, Headquarters, U. S. Marine Corps, 1967, Page 4:

“Sailing aboard the USS Mt. Vernon for New Zealand on 24 January 1943, the 9th Marines (Reinforced) arrived in Auckland on 5 February and disembarked two days later. Because of the lack of accommodations, separate camp sites were assigned for each of the major regimental units; a distance of 20 miles separated Headquarters, which was located at the Pukekohe race course, from the most distant battalion. Jungle warfare training, several 60-mile hikes, and practice in the seizure of a beachhead, occupied the Marines until they loaded aboard five transports on 29 June [my emphasis] bound for Guadalcanal, Solomon Islands.”

He shared a name with his father, and at least one other military officer, of Civil War era. I suspect he was one who had the misfortune of being born into a military family, without the temperament for it. His father had been attracting attention since his days lettering in multiple sports, including 3 years lettering, in football, at the US Naval Academy, from which he graduated in 1912. The son was appointed to USNA and arrived there on 21 June, 1935, from the state of Tennessee, and at the age of 18 years and 11 months. He was originally in the class of 1939. After struggling, he was allowed to push back to 1940, but ended up resigning in February of '39. His younger brother came along and excelled at everything, to put it mildly. It must have been very difficult for young Philip to have to compete with that. I wish I had more to say about him.

Denise Robinson, the Annapolis historian, agrees with this view, as does this author.

Though we lack the details on his exact loss, we are basing our recommendation to include him on:

The "category" links below lead to lists of related Honorees; use them to explore further the service and sacrifice of the alumni in Memorial Hall.
Retrieved from "http://usnamemorialhall.org/index.php?title=PHILIP_V._WEEMS,_JR.,_MAJ,_USMCR&oldid=99434"
Categories:
Hidden categories: