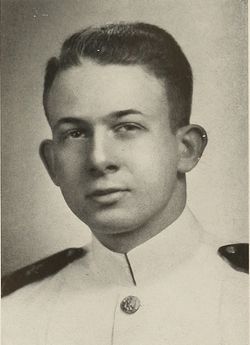 Making the normal unpretentious entry into this world Blake followed a life of little renown until the ripe old age of 12 hours ... at this stage of senility this neophyte diver was found gleefully back- flipping into his bassinet . . . carried his indomitable spirit and diligence into music and academics . . . stars consistently . . . Fall and Winter sets find him brushing up his back flips . . . Spring sets find him polishing up his back hand for varsity tennis ... by way of a flash-back it can only be concluded that ever since the day Blake back-flipped into his bassinet he has demonstrated that he possesses the right combination of qualities which can yield but one end product ... an outstanding naval career.

He was also a member of the swim team.

Lt. Ralph Blake Stothard, a jet pilot and former submariner, was killed in the South China sea when his F4D Skyray plunged into the water after a catapult launching from the carrier USS Lexington. Stothard, son of Mr. and Mrs. Ralph Edwin Stothard of San Diego, was one of the few Navy men entitled to wear the wings of an aviator and dolphins of the submariner.

Unable to find a memory marker or firm date of the crash, but believe it was October 10, 1959. (A Skyray with VF-213, which deployed twice in the late '50s aboard USS Lexington, wrote off an aircraft on that date.)

George Gleason '51 was also on the swim team.

Donald Levisee '51 was also on the tennis team.

Retrieved from "http://usnamemorialhall.org/index.php?title=RALPH_B._STOTHARD,_LT,_USN&oldid=17411"
Categories:
This page was last modified at 11:53 on 17 April 2020.
About USNA Virtual Memorial Hall