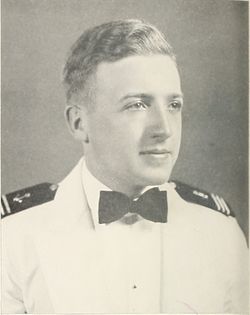 Straight from Kalamazoo Teachers' came this jovial lad, who early in Plebe summer displayed the unmistakable trails of one born to the Navy. Seemingly possessing unlimited energy, Ralph tackled every phase of Academy life with success, meanwhile keeping up the weekly correspondence with the home folks. Adept at the slipstick art, he was always willing to aid the less fortunate in finding "x." A promising future for this sea-dog, we'd say.

Ralph was lost when USS Hammann (DD 412) was sunk by a Japanese submarine on June 6, 1942 in the Battle of Midway.

The President of the United States of America takes pride in presenting the Navy Cross (Posthumously) to Ensign Ralph Lee Holton (NSN: 0-123678), United States Navy, for extraordinary heroism and distinguished service in the line of his profession as Officer in Charge of a Rescue Boat from the Destroyer U.S.S. HAMMANN (DD-412), following the attack on the U.S.S. LEXINGTON in the Coral Sea on 8 May 1942. Ensign Holton persistently returned to the burning U.S.S. LEXINGTON, and under a hail of flaming debris from exploding bombs, ammunition, and gasoline, effected a series of rescues as officer in charge of a boat detailed to rescue survivors. He saved the lives of many who would have otherwise perished. His outstanding courage and determined skill were at all times inspiring and in keeping with the highest traditions of the United States Naval Service.

Retrieved from "http://usnamemorialhall.org/index.php?title=RALPH_L._HOLTON,_ENS,_USN&oldid=20919"
Categories:
This page was last modified at 19:27 on 8 March 2020.
About USNA Virtual Memorial Hall