Difference between revisions of "RICHARD A. MARTINELLI, MIDN, USN" 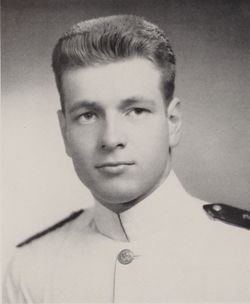 Another one of the men without a Congressman, Dick entered the Academy by his Navy Boot Straps through competitive examination. Well known during high school and in college at Drexel for his scholastic ability, he had more than continued the same pattern here at Navy. Athletics, radio announcing, a crisp Jersey accent, an ever present smile, and an unending supply of amusing observations were only a few more of his interests. Constantly singing, his presence was always announced by a rich baritone voice and clever impersonation. Dick had the kind of personality that eventually would have led to prominence in any career.

Richard is listed with "Those We Left Behind;" he also has a two-page spread in the Lucky Bag. His picture appears on the left under a script "In Memoriam" and above his rank, name, and dates of birth and death. The text above is on the facing page.

Richard was lost in an accident aboard USS Missouri, in or near Guantanamo Bay, Cuba. He was "pinned under a range finder during battle practice."