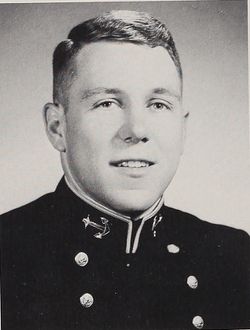 "Burnsie" mastered the many challenges presented by life at USNA after a year at the University of Washington. Never one to find academics the ideal way to spend an evening, Dick none the less, proved to the Engineering Department that he could successfully survive their persistent attacks.

Dick was a welcome addition to intramural football, basketball and especially Softball where he demonstrated his ability as a team player and an energetic competitor. Even though he kept busy with athletic and academic endeavors, Dick still found time to command the company during the first set and to serve on the Ring Dance Committee.

With his warm personality and fun-loving attitude, Burnsie was always available for a good time, except on those mysterious weekends in which he disappeared to Murray Hill, New Jersey.

There's no mystery as to Burnsie's goal after graduation, however, and that's through the Pensacola pipeline to Phantoms.

Richard was a member of the 3rd set of 10th Company Leadership.

According to contemporary reports the F-4J suffered the loss of an afterburner on launch, and both crewmen ejected safely. Although the rescue helicopter was on scene 18 seconds later, by the time the SAR helcopter's rescue swimmer was in the water, the pilot was seen to have been dragged under the surface by his paracute.

The aircraft was owned by VF-191, but this Find A Grave posting indicates he was likely a member of CVW-15.

Retrieved from "http://usnamemorialhall.org/index.php?title=RICHARD_F._BURNS,_JR.,_LCDR,_USN&oldid=13446"
Categories:
This page was last modified at 11:23 on 23 March 2017.
About USNA Virtual Memorial Hall