Buzz, the oldest man in the Brigade, or the "Dirty Old Man" as he is known to most of his friends hails from the city of Arlington, Massachusetts. Buzz is a lover of all sports, and although he was not able to play for Navy except for one season of JV lacrosse; it would be hard to find a more avid fan.

He spent 3 years in the Navy prior to entering USNA, and he has anxiously awaited graduation so that he can fly choppers and do his part in Vietnam.

Buzz adopted the policy of working hard through the week, and as a reward playing equally hard during the weekend. This policy has managed to bring up his below par first year academics and leave him with a little of the highly coveted gravy.

Buzz has a knack for organizing and arousing spirit, and most of all for making friends. I'm sure that when he reaches the fleet he will handle any position he is given with ease. 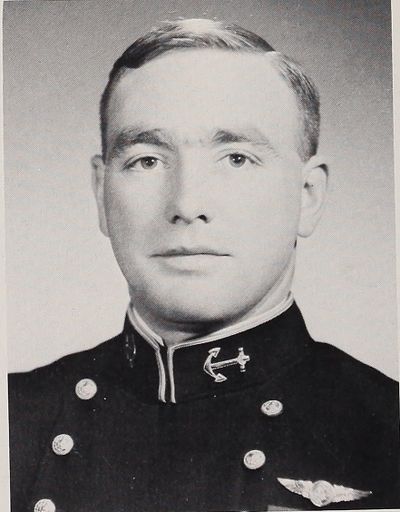 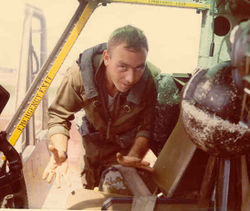 So long ago since we had that last drink the night before your last flight. Even after all these years, you are not forgotten, my friend. RO, LAXRIDE@YAHOO.COM, 11/12/14

Buzz, that's what we called you in HT-8. You were a classmate of mine going through Helo Trainins. Buzz, impossible as it may seem I stayed in the Navy and was somehow promoted to Captain. I remember the great times we had in the Elyson Field O'club. You were young brash, so very confident and fun loving. We both volunteered for HAL-3, my orders were changed, yours were not. Am thinking of you today shipmate, God rest your soul. CAPTAIN KRIS TANDE, USN (RET), CAPTAINLUD@YAHOO.COM, 6/30/04

Retrieved from "http://usnamemorialhall.org/index.php?title=RICHARD_H._BUZZELL,_LTJG,_USN&oldid=7059"
Categories:
This page was last modified at 14:38 on 27 January 2017.
About USNA Virtual Memorial Hall