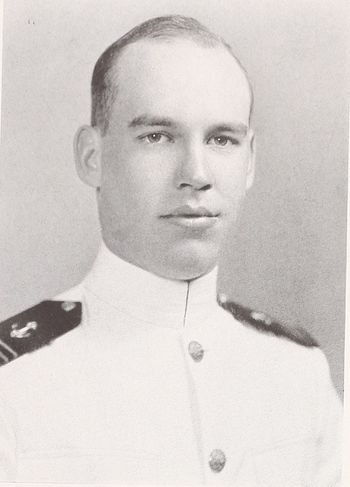 His father was Hiram, a manager of a plumbing and heating company, mother Lotta, brother Henry, and his sister Sarah who received her commission as an ensign in the Naval Reserve Nurses Corps in 1943.

City Sailor Anxious to Get Back

A Wide, boyish, infectious smiles backs up those words from the lips of a young Harrisburger just back from the battles in the Pacific. …

It’s a boy’s smile but it’s a man talking.

You know he knows what he’s talking about.

Lieut. Helm … is just back from submarine service off Australia, Java, the Dutch West Indies and the Philippines.

He can’t go into detail but he’ll tell you with a broad, confident grin that “we sank plenty of Japanese ships.”

“Floating around after we sink their ships.”

“Yes, we’ve seen ‘em through the periscope when the Dutch East Indies, Java, and so on were being invaded.”

Lieut. Helm picked the submarine service because he “wanted to see action.” And has!

There were four youths rooming together at Annapolis. Three are aboard submarines, one is an airplane pilot.

“Sort of over and under?” you say and he grins.

This young Lieutenant can’t talk about the battles but you can guess and not be wrong that he has been in the thick of many an engagement spread across the front pages of the Harrisburg Telegraph.

He tells you that the morale is “of the best” in the Navy and among all fighting men and you know he’s telling the truth. The smile backs up every statement.

“We have a lot of fun,” he said. “It’s just like a football team out to win. We make little bets about how many ships we’ll get when we go out. There’s a lot of good-natured bantering and nobody worries about anything except to sink the Japs.”

Asked if there’s ever the fear of smothering in a submarine (this writer has claustrophobia), he says:

“Never. We just don’t think about that. It gets hot sometimes if we’ve been down for a long time, that’s all. But the air is well-conditioned and we know as long as we don’t get hit, everything’s all right. We know how to go down and how to come up, provided everything clicks.”

Lieut. Helm is back in the United States for the first time in 15 months and is having a grand time but all the same is “mighty anxious to get back and see the gang.”

He was in the Philippines when the Japs bombed Pearl Harbor. From then on he has been having the action he craved back in the not too-far-away Annapolis days.

He has had shore leave in the Dutch East Indies and Western Australia and is enthusiastic about the “fine people, especially in Australia.”

The trip across the Pacific was made by submarine and the return will be the same way.

One, talking with Lieut. Helm, cannot but wish that civilian morale was half as good as that which exists among the fighting men, who are really neighbors with danger.

His chin is up. There’s a smile that won’t come off. There’s confidence in every syllable.

The Lieut. Can’t answer half our questions but says:

“Wait’ll after the war; I’ll have some real ones for you.”

O. K., young fellow with the smile in your eye and the chip on your shoulder, don’t make it too long.

Richard is one of 78 members of the Class of 1939 on Virtual Memorial Hall.

Retrieved from "http://usnamemorialhall.org/index.php?title=RICHARD_L._HELM,_LCDR,_USN&oldid=141603"
Categories:
Hidden category:
This page was last modified at 16:10 on 21 June 2022.
About USNA Virtual Memorial Hall